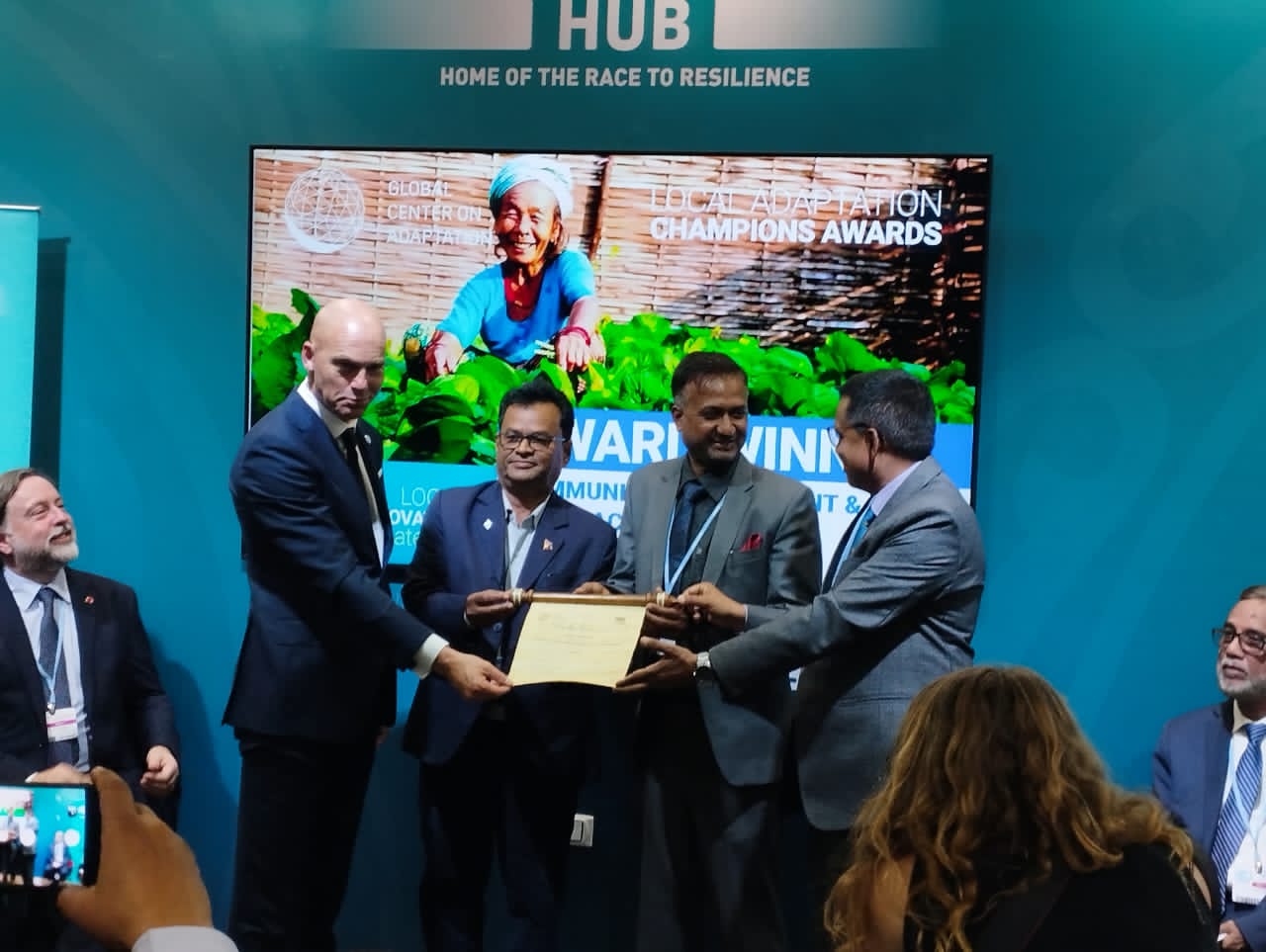 Many dignitaries attended yesterday’s event at the COP27 climate summit in Egypt, acknowledging the importance of this recognition.

Each winner will receive €15,000 in funding to support their work in line with the principles of locally-led adaptation, as well as access to a global network of changemakers.

JoyNews Mahmud Mohammed-Nurudeen, who monitored the ceremony, said the final list of winners, chosen from a shortlist of 20 finalists, includes organizations from Kenya, Bangladesh, India and Nepal.

The Financial Governance category was awarded to the Kenya Adaptation Consortium, which helps communities create, access and use climate finance from a variety of sources to reduce their vulnerability to climate change while enhancing public participation management and use of funds.

The Consortium has also established a County Climate Change Fund to attract climate finance from public, private, local and international sources, providing subnational governments and communities with a predictable, long-term source of funding for adaptation and resilience efforts. .

According to Victor Orindi, national coordinator of the Adaptation Consortium, while a lot was happening in climate finance, it was not happening in a coordinated way. As a result, vulnerable communities were unable to access funds, which was the hurdle they wanted to overcome in order to maintain funding flows.

According to Victor, communities couldn’t have a say in what work to do, so they started bringing people together around a common vision, empowering the community.

“Responding to and adapting to climate challenges is largely context-dependent; and the only way to get it right is to ensure that those affected have a say in how and where it gets done. So allowing them to be involved in the planning process ensures that their voice ultimately matters,” added Orindi.

Bangladesh’s Rangamati Hill District Council is among the organizations that received awards. They won the inclusive leadership category. Through clean, solar-powered water facilities and clean water supply during crises, the Council is working with local communities to combat worsening droughts, landslides and floods. flash floods.

In addition, the Council established a climate resilience committee and supported local communities to conduct climate vulnerability assessments, which informed the development of local resilience plans.

Public relations officer Arunendu Tripura notes that communities now have clean water to water their dragon fruit, mango and lychee orchards and cultivate their land for food and income.

“Furthermore, half of our members are women. I asked them why they chose to install this water facility, and they said as soon as they could decide on a solution, they chose to end the misery they face to seek water, in order to reduce their suffering. It gave me great satisfaction,” he said.

Swayam Shikshan Prayog, an Indian non-governmental organization, won the skills and knowledge category for its work to help women farmers in Maharashtra adopt more resilient and sustainable farming practices, where the focus on cash crops at high water consumption currently exposes farmers to climatic shocks such as poor monsoon seasons.

The organization has created a model of climate-resilient agriculture led by women to help farmers transition from cash crops to food crops and from chemical to biological inputs, as well as soil and water conservation. water and promoting more diverse and resilient livelihoods through allied agriculture. businesses.

According to the organization’s program director Swayam Shikshan Prayog, when the women started telling them they had no food, that’s when their agricultural work with them really began.

“We were first trying to ensure food security for families. Instead of focusing on gardens and vegetable gardens, women grow food on the farm, eat from there and do it organically, water-efficiently and inexpensively,” he said.

Farmers’ reliance on expensive chemical fertilizers, pesticides and market-bought hybrid seeds has led to a significant increase in cultivation costs.

He said to effect change, women must continually use their innate wisdom as stewards of family food and nutrition, which empowers them to think critically.

The Forum has led the way in mobilizing local communities for natural resource conservation, watershed conservation, river system management and degraded land rehabilitation in a flood prone region of Nepal.

“Our intervention addresses pressing issues associated with the livelihoods of the local community along the river basin, from the Siwalik hills upstream to the terai downstream,” said Nagdev Yadav, Chairman of Community Development & Advocacy Forum Nepal.

Nagdev said that because groundwater is the only source of drinking and irrigation water for downstream communities, rehabilitation efforts further upstream improve erosion and sedimentation control while making the water available for people downstream.

“From mango, lychee, lemon and papaya to vegetables, degraded and parched riverbanks have been transformed into green spaces, immediate and long-term income has been secured for the landless and smallholders, benefiting more than 10,000 households. Before, people had to dig or go far to find drinking water. Today, communities have witnessed the results themselves: from growing only rice in a year, they can now grow maize, wheat, vegetables and fruits and they have seen the benefits on their nutrition and their crops. »

The winners were selected by a prestigious jury, consisting of Rania A. Al Mashat, Minister of International Cooperation of the Arab Republic of Egypt, Professor Patrick V. Verkooijen, Director General of the Global Center on Adaptation, Saima Wazed Putul , Thematic Sheela Patel, Vulnerability Ambassador for the Climate Vulnerable Forum, Director of the Society for Promotion of Area Resource Centers and Ban Ki-moon, Chairman of the Global Center on Adaptation Board and 8th Secretary General of the United Nations.

“Our winners show that community-centred, locally-led solutions to the climate crisis do exist, but require support and recognition to be scaled up and have the greatest impact,” said Professor Patrick Verkooijen, Director General of the Global Center on Adaptation. .

According to Professor Verkooijen, the GCA works with international financial institutions and governments to integrate these best practices into larger funding streams, while maintaining what is at the heart of these impactful solutions and successful adaptation: leadership. local.

DISCLAIMER: The views, comments, opinions, contributions and statements made by readers and contributors on this platform do not necessarily represent the views or policies of Multimedia Group Limited.