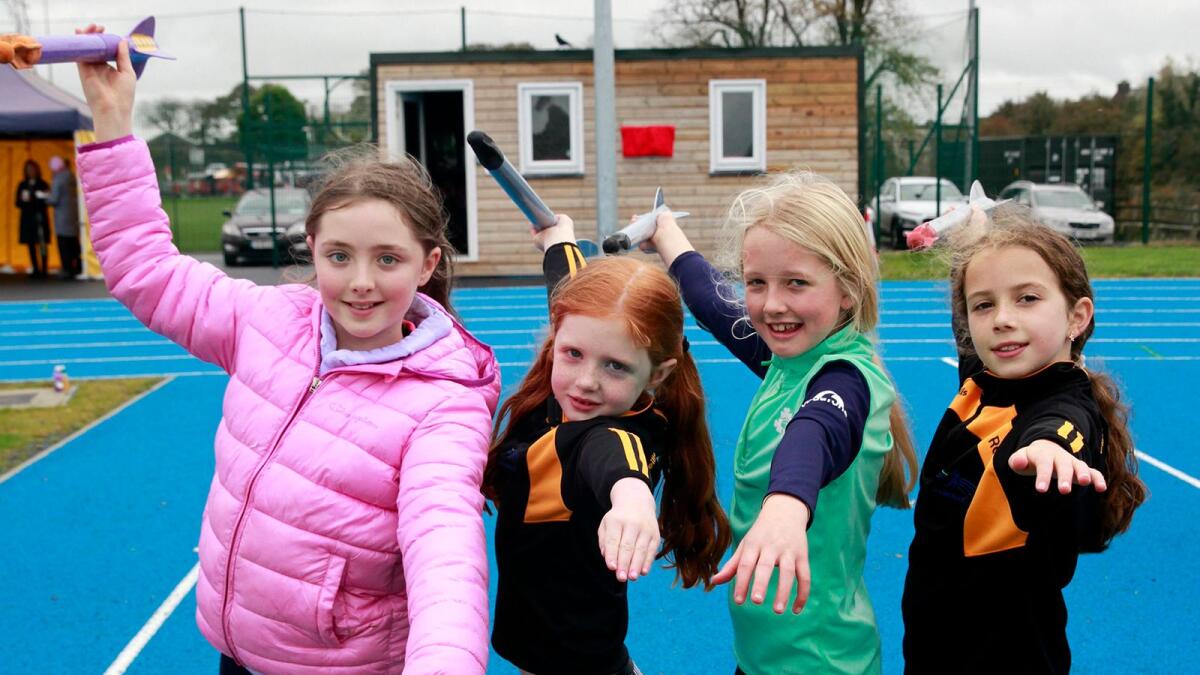 The Green’s new athletics track in Ballinrobe has been officially opened by Deputy Michael Ring.

Over the past three years the Lake District Athletic Club have worked tirelessly to develop the track which is now open alongside facilities at Ballinrobe Rugby and Football Club as well as the astro-turf at ‘Sports Hub’ by The Green.

Prior to the official event, the club showcased some of its talents and gave younger players the opportunity to try out events such as the long jump, javelin throw, shot put, high jump and hurdles . Diarmuid Duffy, Conor Cusack and Oisin Joyce, who are international javelin athletes with the club, were on hand to assist the coaches.

in 2019 the committee embarked on the full-scale project which now includes a 200m running track, sprint lanes, long jump pit, shot put, high jump and area throws. Construction began in 2021 after Christmas and was completed in eight months, having been designed by local architect Donal McCormack and built by local firm, John Madden and Sons.

The whole development cost €366,000 while they were lucky enough to receive €180,000 in funding from the Capital Sports programme. They have also received huge support from many local businesses, patrons and supporters. Without their help this project would not have been possible.

In his speech, MP Ring congratulated the committee, without which this project would not have been possible.

“On behalf of the community, the government, but especially the children here today, some of whom have already made Ballinrobe famous, some have Mayo, Connaught, All-Ireland medals and please God some will go on to a time to represent Ireland because now they have facilities they can train on. We now have three regional tracks in Claremorris, Ballinrobe and Ballina, so they have a great future in athletics.

He said the club had done everything possible to create this track and that with exceptional funds to be repaid, he and his colleagues would find a way to help them.

Deputy Alan Dillon said we couldn’t have enough state-of-the-art facilities like this.

He said: “For anyone who wants to participate in recreational or competitive sports, it provides that convenience.

“We have a range of local, national and international athletes here who have put the Lake District, Ballinrobe and South Mayo on the map and are huge ambassadors for the next generation who aspire to reach this level.”

The three local councilors also expressed their pride in seeing the development now operational and pledged their support for the club going forward.

Former President Linda Cusack said the project started as a pipe dream in 2016 which they presented in 2017.

“A very small group of hard-working committee members. We kept going until we got here today.

“Some of the athletes we started with weren’t even old enough to compete. Word spread and we trained on the rugby pitch.

“We brought athletes to Claremorris to get them used to competing on the track. There was no track between Claremorris and Galway City, so there was a huge clear need for a track.”

Treasurer Seamus Coyne said: “We all know it takes a village to raise a child and in our case it took the whole community to raise the funds to build the track.

“We now have a year-round, all-weather facility with the recent addition of state-of-the-art LED lights. We still have an outstanding loan, but with continued support from our benefactors, we hope to repay it.”

Europa Metals reduces its losses thanks to successful drilling campaigns