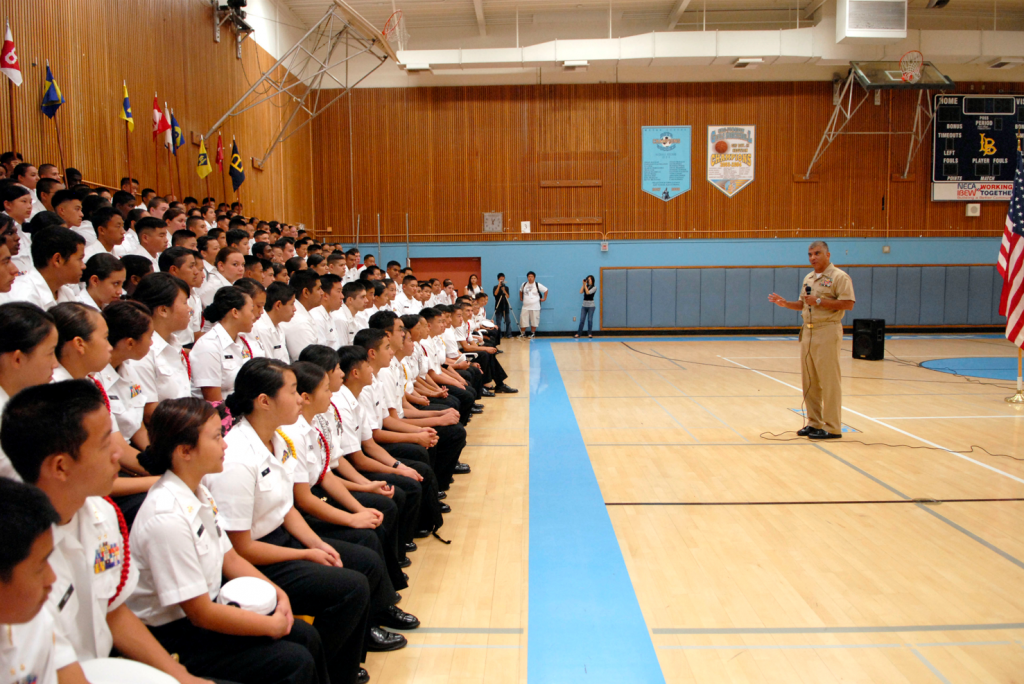 Breaking the Habit of War: The Militarism Debate in American Education — co-authored by School of Social Work Associate Professor and Ph.D. Program Director Scott Harding — is the second book in a University of Georgia Press series on children, youth, and war. In the following Q&A, Harding and one of his co-authors, Seth Kershner, Ph.D. student at the University of Massachusetts Amherst, discuss their research and recommendations for change.

In the book, the authors analyze what they see as the militarization of schools in the United States and trace 100 years of efforts to keep the military from infiltrating and influencing public education. Examining the hidden history of resistance to the Reserve Officers Training Corps (ROTC) in higher education and the Junior Reserve Officers Training Corps (JROTC) in high schools, including the development of the ” military counter-recruitment,” is of particular interest to Harding and Kershner. They have published numerous articles on counter-recruitment over the past decade, with the goal of understanding and bringing to light those who have challenged the privileged status of the military in American educational institutions. They recently spoke with UConn Today about their work and the issues it raises.

In the introduction to the book, you state that while school militarism was a contested topic for much of the 20e Century is now “a largely forgotten issue”. What interested you about it now?

Scott Smith: This is one of our long-standing research interests. We wrote an article in 2011 that was published in the Journal of Sociology and Social Work. Prior to this article, there was little published scholarship in the academic literature dealing specifically with counter-recruitment. There had been very few critical studies of the extent of school militarism and the presence of military recruitment in public schools in the United States.

I met Seth while teaching an elective at the School of Social Work: War, Militarism, Peace, and Social Work. We developed a relationship that led to writing the article and then researching and interviewing across the United States with people involved in counter-recruitment. This led to a first book we wrote, Counter-Recruitment and the Campaign to Demilitarize Public Schools. It was the first comprehensive study of counter-recruitment, focusing on the period from the 1970s to the present, using the end of the project in the United States as a starting point for the actual emergence of counter-recruitment. We’ve been doing this for over a decade.

Seth Kershner: I would add that I first understood that there would be an interesting historical angle to recruiting in the UConn archives. I started working on this over 10 years ago and went to the Dodd Center for Human Rights and went through some newsletters from the early 70’s called Counter Pentagon. Thanks to this newsletter, the first counter-recruiters from all over the country communicated with each other. In the 2000s, during the Iraq War, when counter-recruitment was very much in vogue, even seasoned activists assumed that military recruitment in schools was new. But it has this long history, as we show in the new book.

In your research, dating back to the 1920s and more recently, are there any examples of recruitment strategies that have surprised you?

Sask.: It’s important to keep in mind that although it has a long history, recruiters visiting schools and using sophisticated sales techniques on children is a fairly recent phenomenon dating back to the 1980s. that we learned happened more recently. A new development is moving from high school level to colleges. Since the 1990s, there has been a program called STARBASE, which brings 5th graders and some 6th and 7th graders to military bases. This is an active program in Connecticut and a few dozen other states across the country. It’s a week-long program and they have hands-on science activities, which seems harmless, except for the last day when uniformed military men arrive and explain to these 5th graders how exciting it can be to work in the ‘army. This is a form of what we call “pre-recruitment”. Of course, you technically can’t draft a 5th grader into the military. But by looking at trade journals published by military recruiting services, we were able to identify the language used by recruiters, such as “planting a seed.” That’s how they describe these kinds of operations at the college level.

SH: More recently, something we highlight in both books is a disparity in terms of recruitment. Through a Freedom of Information Act request, we obtained data on the presence of military recruiters in high schools in Connecticut and Massachusetts. We found that Avon High School and Bloomfield High School, which have markedly different demographics, were targeted in different ways by the military. During the period we were examining, recruiters came to Avon High School twice during the school year, while at Bloomfield High they came to Avon High School on average twice a week throughout the year. There are other examples like this where schools that might be in low-income or higher-poverty communities are visited more frequently by recruiters compared to schools that are much more affluent and less diverse.

You talk about the school at the military pipeline. What is that? How do you define it?

SH: We see it as a way young people are socialized into a potential career that is portrayed as desirable, exciting and virile or masculine. There’s clearly a trend where the military are in schools, both formally and informally, and have a much larger presence, when other voices, other career options, may not be available with the same frequency as the military.

Sask.: You can think of this school-military pipeline in terms of resources. We mentioned Bloomfield and Avon, and there are many examples like that where there are schools that don’t offer the kind of courses that prepare students to compete and get into colleges. Education Week did a study. They looked at how many schools across the country offer physics and other STEM courses that students would typically need in their academic record to be competitive. About 40% of high schools in the United States do not offer physics courses.

The Rand Corporation did a valuable study a few years ago and found that in some states two-thirds of public high schools had a Junior Reserve Officer Training Corps (JROTC). These are statistics that should alarm us – that in some states there are more schools that offer military training than offer traditional, rigorous academic courses that prepare students for college.

Members of the military and veterans are revered by many and hold a special place in our society. How do you talk about this issue with people who don’t see a problem with recruitment in schools?

SH: It’s a good question. Note in part that the military is guaranteed access to public high schools in the United States through federal law. Access to schools is not guaranteed to other types of recruiters. If the military does not gain this access, federal resources can be withdrawn from schools and school districts. The rules of the game are already unequal and the army is a well-resourced institution. They have considerable financial and personnel resources to be able to saturate schools across the country, which is difficult for other institutions or other voices to replicate.

What do you suggest as potential solutions or alternatives? How to break the habit of war?

Sask.: I will propose two common sense proposals. A very simple solution is to cap the number of annual visits by military recruiters. For this to comply with federal law, there must be equal access for every type of recruiter, including college, employment, and military. There is no reasonable justification for 100 visits a year to an individual high school by the military. So limit the number of annual visits, limiting those recruiting visits to a guidance counselor’s office and allowing students to register in advance. Reasonable and common sense regulations.

SH: Another idea is to add a curriculum to local schools that explores the pros and cons of military service. The reality is that the US military is a massive entity with a budget of over $700 billion a year. If we look historically, the US military has been involved in formal wars and other informal types of use of force on numerous occasions, most recently a 20-year invasion and occupation of Afghanistan and over 10 years of occupation of Iraq. But we don’t see an opportunity for public school students to learn this and engage with different perspectives on the use of military force and the presence of military recruiters in schools. Why not have some type of program or bring in guest speakers to talk about the pros and cons of these issues?