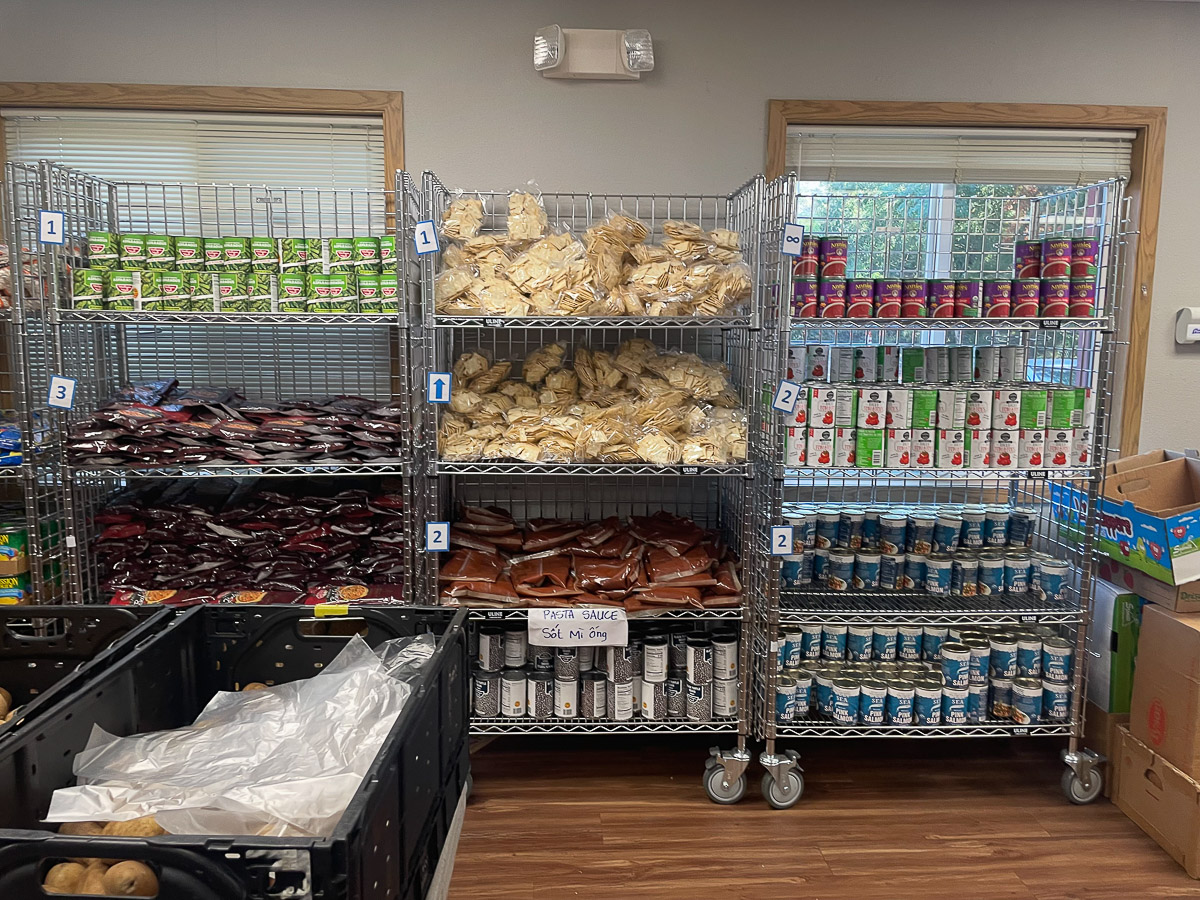 The White Center Food Bank (WCFB) is tucked away in a corner behind tall green trees, mostly hidden from public view despite its significant impact on the community.

Customers wait outside the building for their turn to pick up food from the grocery store model space. People push their carts through the small space, sometimes bumping into each other to pick up items, like fish, meat, fruit, vegetables, macaroni and cheese boxes, and donuts and cookies. sushi donated by Safeway and Costco.

WCFB’s current location is set to become affordable housing in early 2023, and executive director Carmen Smith said WCFB has decided to take this opportunity to find a location with easier access to public transport to fill the gaps. underserved gaps in White Center neighborhoods.

The WCFB fundraising campaign raised $2.2 million, nearly half of the $6 million goal required for building renovations and upgrades. The new location was announced in late September and is located in downtown White Center. Smith says the move will allow WCFB to expand its services to the community by having more space and better access to public transportation for its customers.

After conducting a University of Washington Geographic Information Systems (GIS) survey in 2017, WCFB found that a majority of its customers drive or carpool to the current location.

“If you live within a mile radius, you’ll probably have to take two buses to get to [to the current WCFB location]. We eat an average of 60 to 70 pounds of food per visit, and so taking that on one bus, let alone two, is just a big hurdle for people,” Smith said.

The new building is located near Sound Transit, other commuter buses and the RapidRide H linewhich will expand connections in March 2023 from downtown Seattle to southwestern areas like Burien and White Center.

Smith says the search for a new location took years, and WCFB received $1 million in funding in early 2021 through Washington State, with support from Senator Joe Nguyen.

The move will also improve center operations by providing more space for its customers, food storage and employees, as well as expansion beyond the food bank for community events, such as a potential night market, says Smith.

“We decided to do what was best for us as an organization and start a fundraising campaign in September, because we just know that this new food bank, brick by brick, will be built by the community,” said Smith.

According to its website, the center was formed as an emergency response in the mid-1970s to support families in the White Center and Highline communities. Rose says the food bank makes home deliveries to about 120 families a month. WCFB serves over 82,000 people and nearly 26,000 households, distributing over 1.5 million pounds of food.

The center also gleans from other community grocery sources to line up its shelves. Jefferson Rose, WCFB’s director of development and communications, says about 20% of food donations come from the local grocery store, from stores like Whole Foods, PCC, Safeway and QFC, to reduce food waste. In addition to grocery rescue, the center offers a range of services, including seniors-only daytime food distribution, home deliveries, a mobile food bank program for seniors and people with disabilities, a caretaker -food for baby, a cultural food shopping program, and more. .

Smith says the community has been supportive and are thrilled with the venue change.

“I’m really excited about their move because they’ve grown so much,” said client Angela Mae Hernandez.

Hernandez and his family have been clients of WCFB since November 2006, when they moved from eastern Washington and were homeless in Auburn before moving to the White Center.

“So they ask, what would we like? They give us what they have for an emergency bag, but they only ask for Joshua, because sometimes it’s hard to get things, and he’ll turn up his nose because that’s not what he wants Hernandez said.

She also likes that WCFB operates by appointment to ensure there is enough food for all of her customers.

As Mexican and Native American, Hernandez says she appreciates the cultural variety of products offered. She shares that she is able to use the flour from the center to make fried bread and tortillas.

“They have everything you could want. They have cilantro, onions for your chilies, salsas, guisada meat and fresh tomatoes, always the best,” Hernandez said. “The food bank is like a gift. It’s like a gift from the community for people who have difficulty finding food. You can get all your food, you can get your pasta, beans, flour, dairy and meats; they provide everything.

And with this move, WCFB hopes to bring that gift to even more people. “We’re really excited about this next chapter for the food bank and being able to do the work the community deserves,” Smith said.

Jadenne Radoc Cabahug is a senior at the University of Washington with a major in Communications: Journalism and Public Interest and a double minor in International Studies and French. She began her journalism career at age 15 in Seattle through NPR’s RadioActive Youth Media program KUOW 94.9 FM, producing radio reports and podcasts. Since then, she has transitioned into print and online journalism, writing for local Seattle outlets like cross sectionthe International Examinerthe Daily and the latest international news factual.

Here’s how to tell if your startup is PR-ready