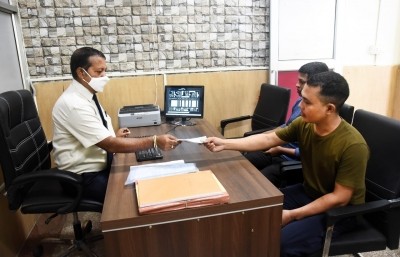 Guwahati, October 8 (IANS): An overseas ticket counter has been opened at Guwahati Railway Station for the benefit of passengers from the North Eastern region traveling by Mitali Express, which was reported on June 1, linking West Bengal’s New Jalpaiguri and Cantonment from Dhaka to Bangladesh, officials said on Friday.

Northeast Frontier Railway (NFR) has started operating the Overseas Ticket Counter at Guwahati Railway Station, which would benefit travelers like tourists, merchants from Northeastern states who want to avail the services of Mitali Express.

NFR public relations manager Sabyasachi De said earlier tickets for the Mitali Express could only be purchased at Kolkata and New Jalpaiguri stations.

Now, passengers no longer need to travel to New Jalpaiguri or Kolkata to book tickets on the Mitali Express, he said.

The distance between New Jalpaiguri in North Bengal and Guwahati, the main city of Assam, is 333 km.

The NFR, one of 17 railway zones in India, operates fully and partially in six of the eight northeastern states, excluding Meghalaya and Sikkim, and in seven districts of West Bengal and five districts of northern Bihar.