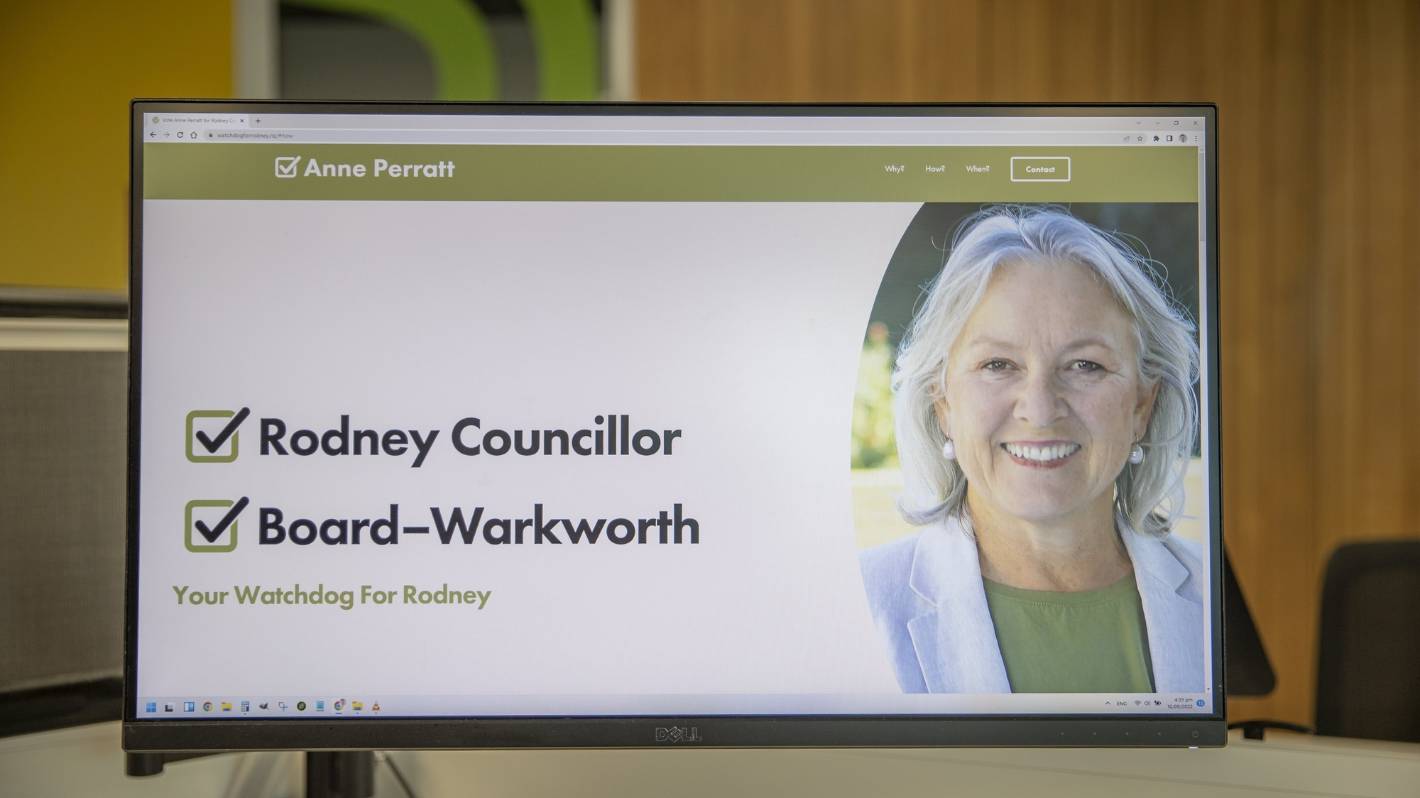 Anne Perratt claims to be a watchdog, but refuses to acknowledge the outlandish theories she has advanced in the recent past.

A local election candidate who presents herself as a “watchdog” is a “dog whistle” to supporters of disinformation campaigns and victims who may have fallen prey to them.

She has also made comments about the environment and minority groups on her campaign website which one language expert describes as “a subtle but deft dog whistle”.

Prior to running for office, Perratt appeared on several podcasts from LibertyNZ’s Grant Edwards, a man who claims Putin is the good guy in the Ukraine conflict and shares posts suggesting the Christchurch mosque shooting was a hoax.

In a podcast, Edwards describes the Covid-19 vaccine as “a little blood-contaminating time bomb with many nano razor blades”. Perratt agreed and implored listeners to “seek the truth” and “consider all evidence.”

In another, Perratt said New Zealand was in an “information war” and young Kiwis needed to “wake up” and “finish the job” started at the Wellington protest.

However, these are not the issues that Perratt is visibly campaigning on. Her website claims she will be a “watch dog” for Rodney.

The site capitalizes on a legitimate concern that the former district of Rodney hasn’t received its fair share of investment since it was merged into the supercity of Auckland, but is turning into a dog whistle over denial of climate change and race-fueled anti-co governance messages.

“We have not given the board a mandate to try to change the global climate with our tariffs, or to achieve undefined equity goals,” Perratt said on its website.

“Rodney is a mecca for hard-working people who want to get ahead…and my motivation to pursue equity for Rodney comes from a deep respect for the efforts of the first families who settled in our area,” a- he declared.

Another quote Perratt had in large letters was particularly telling: “I think the expressions that come from the public often come from minority pressure groups, and the opinions of the silent majority there, which is extremely broad, are not not heard. ”

Dr Suze Wilson said the rhetoric was “a subtle but deft dog whistle”. Dr. Wilson is a leadership researcher specializing in linguistic analysis at Massey University.

“These words attempt to send a message that will be received by climate change deniers and those who oppose fairness,” Wilson said.

“They present a threat-based point of view, which is common among populists. It plays on the fear that we will somehow be attacked, and we the people have to be ready to defend ourselves.

In the recent Documentary Fire and Furythe trick circuit The investigative team revealed how anti-vaccine misinformation had merged with far-right and extremist ideology, bringing previously fringe ideas to the mainstream.

Several members of the public have contacted Things after receiving unsolicited emails from Anne Perratt containing misinformation, and feared she hid her opinions during her campaign.

One of Perratt’s emails accused the Labor government of advancing “Agenda 21”, which is seen by conspiracy circles as a global effort to reduce the world’s population using weaponized vaccines.

When Things Asked Perratt if she stood by her statements made in podcasts and other online forums, she said she didn’t see the relevance to local elections.

“Perhaps it is because the council is preoccupied with so many societal issues that it fails to fulfill its core responsibilities?” Perrat replied

At a debate in Snells Beach, local election candidates were asked if they had any affiliation with UnifyNZ – a group which had brought Winston Peters to Warkworth to talk about co-governance, and is holding a meeting in September on how Agenda 21 is “intelligently intertwined” in Auckland Council.

Perratt reportedly said she spoke with the group and was considering what they had to say. However, she said Things that she was not affiliated with disinformation groups.

Ballots for the Auckland local elections will be sent to letterboxes on Friday and voting will be open until October 8.

How close is Colorado’s U.S. Senate race? Campaigns ready for a “dogfight”