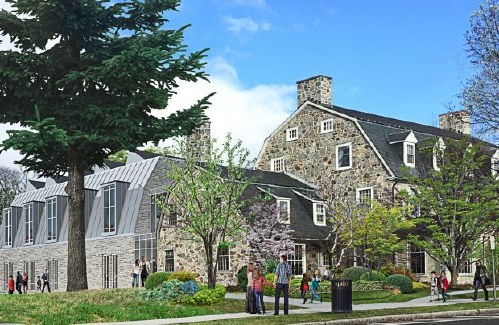 AMHERST — Leaders of a fundraising campaign for the renovation and expansion of the Jones Library say they are well ahead of schedule in their fundraising efforts, raising nearly half of a goal of $6.6 million nine months ahead of target.

At the same time, however, campaign officials know they will need to raise even more money now that inflationary pressures have driven the overall costs of the project at 43 Amity St. from $36.3 million to between 43 and 50 million dollars.

“We knew we would need to raise over $6.6 million,” campaign co-chair Kent Faerber said.

Ginny Hamilton, who manages the fundraising campaign, told the Jones Library Building Committee last week that organizers had hoped to reach half of the goal by next May, but they are already close to it.

Faerber said hiring Hamilton and securing professional accounting help and a graphic designer to design materials and a website are all part of the accelerated campaign underway.

“We are building a more robust campaign than we anticipated,” Faerber said.

In a related development, Jones Library secured $50,000 from the state budget to pay for part of the cost of designing a space within the library for its English language and citizenship program.

The program, in place since the 1980s, helps immigrants, students and other non-English speakers in the region to hone their communication skills. However, as the program has grown in importance over time, some of this education now takes place at tables scattered around the library, and sometimes even in a quiet corner of the building or a stairwell.

These are the reasons why Lynne Weintraub, ESL Program Coordinator, has supported a renovated and expanded library that will provide better space for learners, who receive more than 16,000 hours of conversation and language instruction each year, including including assistance in obtaining US citizenship.

“What we don’t have here now, and what I’ve always dreamed of, is a place where students and waiting tutors can chat together without disturbing people studying or having to stand in stacks” , Weintraub said in a statement.

A centralized gathering space, she said, will also help people feel more confident in their speaking skills, while quiet study spaces will allow volunteers to better do one-on-one tutoring in privacy.

The $50,000 from the state also complements a commitment of $1 million from the city’s Community Preservation Act account for the Special Collections Hall, $200,000 from the Massachusetts Cultural Facilities Fund, $46,000 from the Beveridge Foundation and at least $1.6 million in historic Massachusetts tax credits that will come when the project is complete.

Amherst also joins other area communities in appealing to the Massachusetts Board of Library Commissioners and state officials for more state funding for their library projects.

Meanwhile, Faerber said he appreciates that library officials avoided a pause in preparatory work for the overall expansion project or disruptions that would disrupt the fundraising campaign.

The actions that have taken place over the past two weeks have been positive, with elected trustees pledging to keep the project on track by pledging to use the Jones Inc. endowment to help pay for it, followed by the construction committee voting 5-1 that the project proceed to completion of the design phase and eventual tender documents.

City Manager Paul Bockelman and Chief Financial Officer Sean Mangano abstained in the building committee vote, while committee member Zander Lopez voted against for fear of advancing cost estimates. Lopez said his concern is whether the city has enough money, noting that the teachers have not been able to reach a new contract with the school board.

But administrator Alex Lefebvre said his concern was that it would be financially irresponsible not to continue; and Austin Sarat, chairman of the trustees, said that at the lower of the estimates, and with the financing plan in place, there would be no increased costs for the city.

Bockelman said the unfolding of the project is a conversation between the trustees and the city council, with its responsibility to ensure that the expansion and renovation of the library is carried out as well as the construction of a new elementary school, d a headquarters of the Department of Public Works and a fire station in South Amherst. .

“We have a lot of uncertainty right now,” Bockelman said.

Scott Merzbach can be contacted at [email protected]