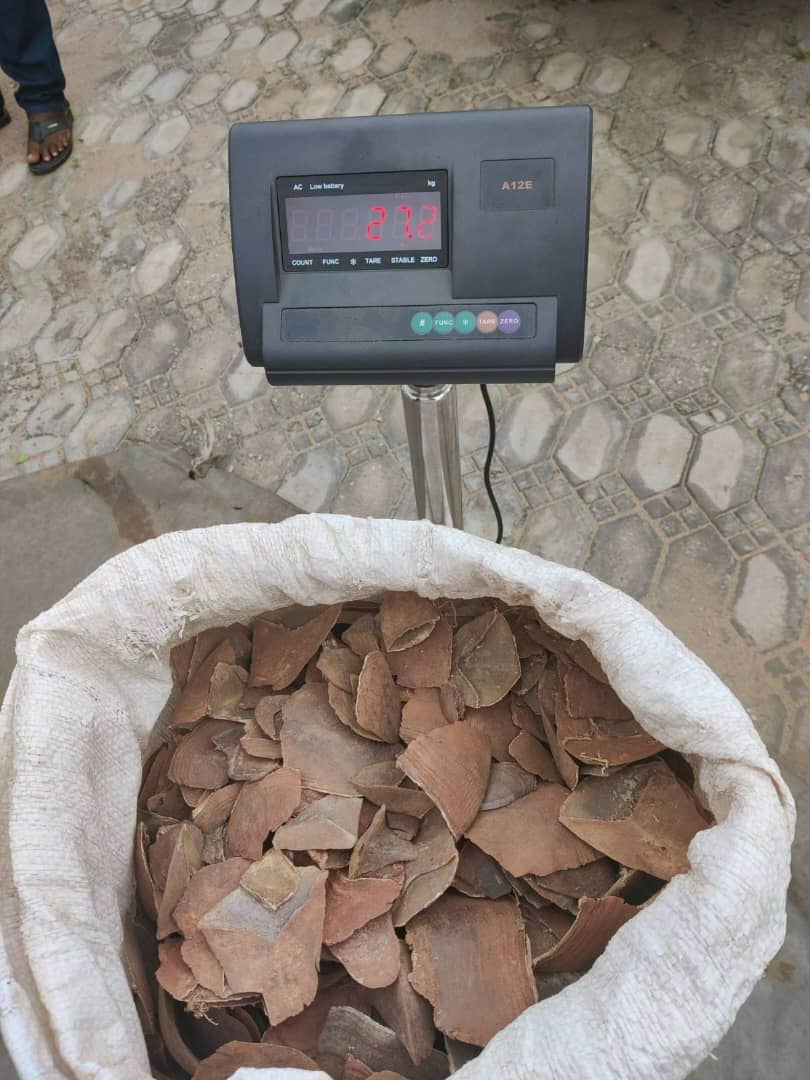 The Nigeria Customs Service (NCS) on Sunday arrested three Vietnamese and five others for attempting to smuggle 397.5kg of pangolin scales and ivory through Nigeria.

In a press release made available to LEADERSHIP by the Service’s National Public Relations Officer, Timi Bomodi, he said the interception was carried out in conjunction with the Wildlife Justice Commission (WJC).

According to him, the preliminary investigation revealed that the three Vietnamese nationals are identified as high-ranking members of a major organized criminal group involved in the trafficking of ivory, pangolin scales, rhinoceros horns and lion bones from Mozambique and South Africa via Nigeria to Vietnam.

The three suspects were arrested while sourcing pangolin scales in Nigeria, 397.5kg of which were found in their possession.

LEADERSHIP reports that the Wildlife Justice Commission is an international body working to disrupt and dismantle illegal wildlife trade networks.

Bomodi said the suspects were arrested in an intelligence-led operation, saying: “Collaboration between NCS and WJC led to the confiscation of 400 kg of pangolin scales offered for sale on the illegal network.

“Both organizations were able to identify other members of the criminal syndicate for arrest in order to put a further end to the environmental destruction caused by these unscrupulous elements. The arrested suspects were arraigned on various counts. charge related to the illegal wildlife trade.

“These arrests came as part of a proactive law enforcement operation targeting the top echelon of wildlife traffickers around the world, and are believed to have caused unprecedented disruption to the organized global wildlife trafficking network.

“This is the fourth major illegal wildlife arrest in a year, a result of the strategic partnership between the Nigerian Customs Service, the Wildlife Justice Commission and other foreign governments. It demonstrates the commitment of the Nigeria Customs Service as a formidable ally in the fight against wildlife trafficking.

“Initial crackdowns in 2021 had resulted in the discovery of 7.1 tonnes of pangolin scales and 850kg of ivory, all of which were seized by the NCS.”

Bomodi also added that the Comptroller General of Customs, Colonel Hameed Ibrahim Ali (Rtd) commended the officers of the Service for their efforts to break the chain of illegal wildlife trade and illegal deforestation and logging activities. of trees.

The CGC assured the public that the Service will leave no stone unturned in its efforts to help the rest of the world protect endangered species and prevent deforestation.

“The Nigeria Customs Service would never allow the perpetrators of these crimes to profit or escape the wrath of the law,” Ali said.

It will be recalled that in 2021, the Comptroller General of Customs at a press conference in Lagos presented a seizure of pangolin scales and elephant tusks worth N22.6 billion.

This achievement has been widely recognized as a major boost in the fight against the extinction of endangered wildlife species in Nigeria.

“It is pertinent to conclude that Nigeria Customs will continue to enforce Schedule 6 of the Common External Tariff which has identified endangered species as an absolute export ban.

“As a signatory to the Convention on International Trade in Endangered Species of Fauna and Flora (CITES), the Service will not relinquish its enforcement responsibilities by removing unsustainable harvesting and unethical to the country’s fragile ecosystem and its biodiversity,” the Customs spokesperson said.