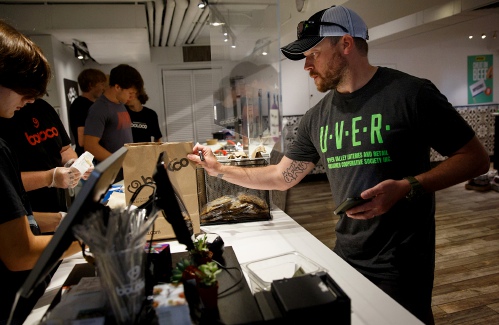 HANNOVER — After nearly a year and no profit to be made, a delivery cooperative in the Upper Valley has gone out of business.

The Upper Valley Eateries and Retail Consumer Cooperative Society, better known as UVER, was started by three Hannover restaurateurs who were tired of losing money to national delivery services like GrubHub, DoorDash and Uber Eats.

“I think it was a great idea and a lot of good intentions here, but it ended up being, due to the timing, and just a few quirks in our area, it ended up being very difficult to execute,” said Jarett Berke, owner of Lou’s Restaurant & Bakery, which launched UVER with John Pepper of Boloco, and Nigel Leeming, of Murphy’s on the Green. “I absolutely think something like this can exist, but they say for a business to be successful it has to be a good idea, it has to be well funded and it has to be well executed. I think we had a good idea, I think we did a pretty good job of executing it, but we weren’t well funded.

To be successful, Berke said it needed 30 restaurants to sign up and 1,000 people to become members by buying a $25 share.

“Despite a lot of effort, we only managed to get 15 restaurants signed up and we assumed the college would be a big part of our… membership and really the students never got into the system,” Berke said.

Part of that was the delivery charge, which started out at $6 and increased the further the driver had to go.

“It had to be because the distances were long and we wanted to make sure our drivers were fairly compensated,” Berke said. If a student wanted to buy a burrito at Boloco, for example, they might spend more on delivery and tipping than on the food itself. “We’ve had a lot more success with local families, but that wasn’t enough to bring UVER to break even.”

The cooperative never made a profit, losing money every month. For every $6 delivery charge, the co-op received $2 and the drivers earned $4, with mileage for longer trips. When it closed, UVER had about ten on-call drivers. Of these, five or six regularly took deliveries.

The trio invested “several tens of thousands of investments to try to break even and we just couldn’t make it,” Berke said. Pepper, Berke and Leeming also have businesses and families to support. “I think we were close. I really do.”

Over the months, they tried to set different delivery rates, among other changes, in an effort to make the business profitable. In May, UVER’s only full-time employee, executive director Chris Acker, resigned. This played into their decision to close.

Funding was the main challenge. UVER simply didn’t have the start-up money it needed to really succeed.

“Even with steady growth and incredible local support during this time, we have not been able to maintain the financial stability necessary to hire much-needed staff. Ultimately, this resulted in a lack of capacity,” Acker wrote in an email. “Unfortunately, my requests for support could not be met due to our financial situation and it was no longer viable for me to continue.”

While they were in talks with the Hanover Co-op to take over the deliveries, this never materialized.

Plus, they were never able to recruit a pizza place, Pepper said, which might have attracted more customers.

“As a local co-op, we’ve really relied on what I call irrational support from the local community instead of being yet another one of those tech companies raising millions of dollars to buy awareness. and buy customers,” Pepper said. “We needed it to work organically and by word of mouth. Frankly, it wasn’t good enough to be able to do that.

Boloco continued to employ its own drivers throughout UVER’s life.

On any given shift, there are usually two drivers working, Pepper said. While he had talked to them about becoming drivers for UVER, there wasn’t much interest.

“Our delivery drivers are making a ton of money, and to transition more into a contract delivery situation, our drivers just won’t,” Pepper said. “There is still something missing in the model for the worker, for the real delivery driver. There must be some sort of compensation they can count on. At the same time, the advantage is that you can make your own hours, so how do you combine the two? »

Another challenge was timing. Coming out of the worst of the COVID-19 pandemic, restaurants have had to cut hours due to staff shortages at a time when more and more people feel comfortable eating out again.

“You kind of have this perfect storm where we kicked off this delivery business during the pandemic when it would have been very helpful,” Berke said. “When we kind of hit our stride and were up and running, people were going out to eat again and restaurants were struggling to get a full staff.”

Even if UVER was able to attract additional customers to restaurants, there’s a chance “they don’t even want it because they can’t even seat people in their dining room,” Berke said.

Tracy Hutchins, executive director of the Upper Valley Business Alliance, agreed that timing and finances played a role. She praised the founders for establishing the business as a cooperative and remaining community-focused.

“I think it was the best idea and maybe the time wasn’t right,” said Hutchins, who was also a member of UVE’s board of directors. “If there was a way to maybe gather some investment and try again, it could be successful. And honestly, I think the Upper Valley is probably the perfect place for that simply because there’s such a commitment to buying locally and supporting locals. I think it could take off in the future.

Pepper, Acker and Berke accepted. “UVER was definitely about to get it right,” Acker wrote in an email. “I would be interested to see if more funding early on might give a locally owned delivery service a better chance.”