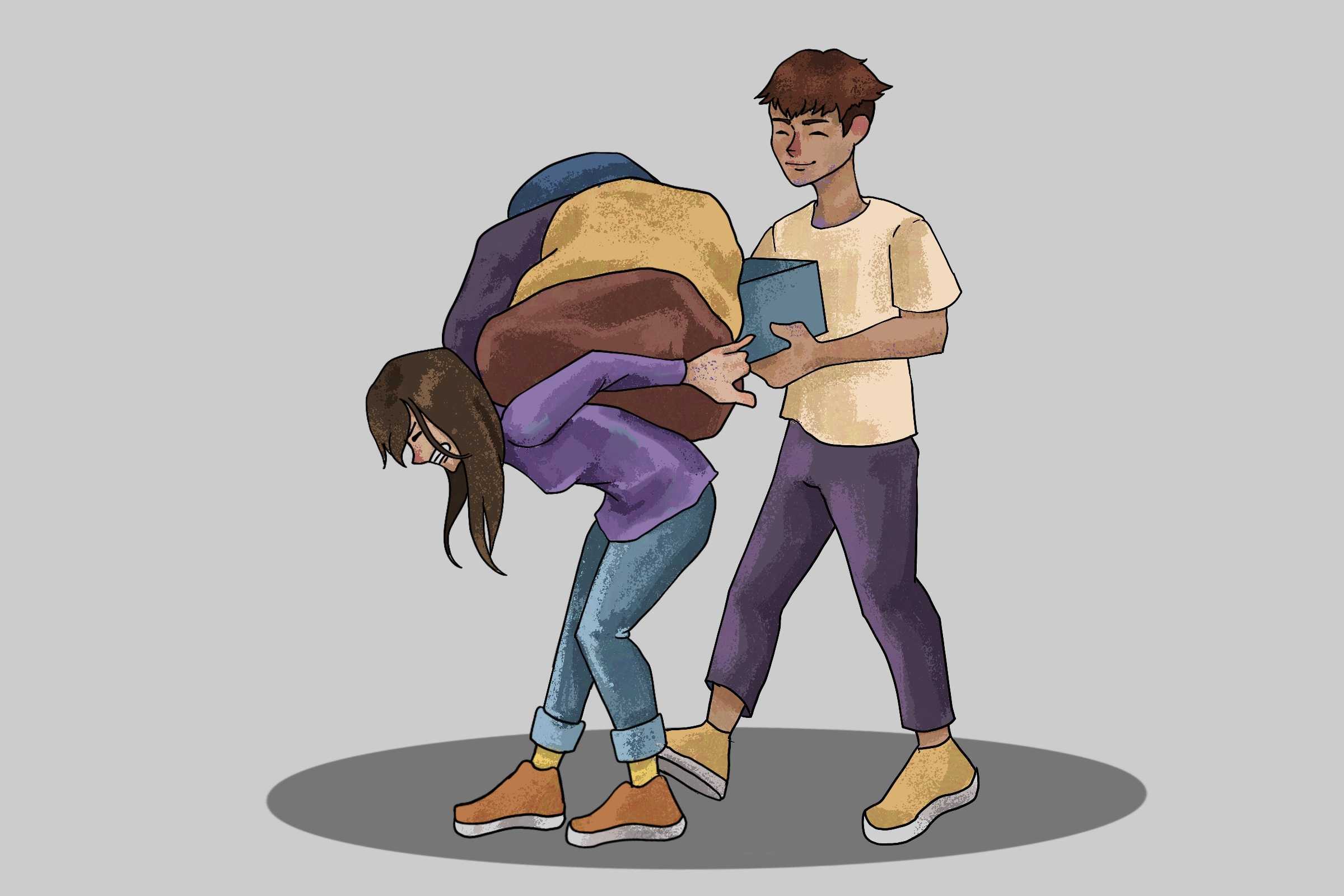 dissatisfaction of women in heterosexual relationships

For young girls in development, some of the biggest media outlets on popular platforms like Disney and Netflix are an endless stream of romance movies featuring dreamy men who would go to the ends of the earth for their love interests. These media fuel what would become many women’s dream partner: the fantasy of a perfect, devout lover who would work to better himself if his partner expressed his displeasure with their relationship.

But as a college student surrounded by newly mature relationships, I noticed a pattern of disillusion among my female peers in heterosexual relationships. Many of us have always felt misunderstood, abused and underappreciated by our male partners – unlike the pampered and exalted love interests of the prince charmings we grew up seeing. Our standards for male partners in straight relationships seem to continue to erode over time, and we emphatically relish and commend our partners for performing the absolute bare minimum. Now, more than ever, we wonder if we’ll ever feel fully fulfilled in a straight relationship.

A 10-year Australian study of marriages and relationships came up with the frankly unsurprising result that women are less satisfied than men in heterosexual relationships. This dissatisfaction occurs specifically on two levels: sexual and emotional. However, let me be clear when I say that men’s inability to fully satisfy their female partners is not due to men’s malevolent intent in relationships to deprive their partner of effort, but rather to a consequence of the way our collective society socializes young boys and men.

The orgasm gap, according to a study conducted by researchers at Rutgers University, “refers to the well-established gap in orgasm frequency between cisgender men and women when engaging in heterosexual sex, with men having more orgasms than women on average”. This sexual inequality disproportionately affects heterosexual women, with lesbian and bisexual women having orgasms at higher rates than their heterosexual counterparts. But why are heterosexual women the least sexually satisfied?

Orgasm is one of the strongest general indications of female sexual satisfaction in a relationship. So while only 65% ​​of women in heterosexual relationships usually or always have an orgasm during sex, while an astonishing 95% of heterosexual men usually or always have an orgasm, it’s no wonder these women feel that their sexual pleasure is not prioritized or valued. in the same way as their male counterpart.

The socialization of young men and boys in our society is at least partly responsible for this sexual inequality. In fact, the myth of gender essentialism—the “widespread societal belief that there are natural, biological, and physical differences between men and women”—directly contributes to maintaining the orgasm gap. Gender essentialists reinforce inaccurate beliefs that women and men have naturally different libidos, that women inherently enjoy less than men, or even that women prefer emotional connection over sexual pleasure (whereas men… right? ). However, according to sex researchers, “These beliefs about female orgasms have less to do with women’s inherent inability or lack of desire to orgasm, and more to do with how gender norms shape and limit expectations. Essentially, the orgasm gap is a cultural phenomenon that is fueled by the normalization of sexually dissatisfied women.

Evidence of this failure exists in our abysmal sex education curricula, which reinforces the mystification surrounding heterosexual women’s orgasms when they fail to explain to heterosexual men how to sexually satisfy their female counterparts. For example, one study found that while three out of four women said they couldn’t orgasm during sex, with half stressing the importance of clitoral stimulation, “30% of men have said they believe the best way to help a female orgasm is through penetrative sex acts,” proving how poorly educated straight men are about female pleasure. sexuality really educated on this issue, they would produce boys and men much better equipped for future mature relationships.

In society, men and women have adopted pleasant attitudes towards the difficulty of locating the clitoris during intercourse. However, this too is a reflection of a failing sex education system. A study conducted by YouGov in the UK asked female and male participants to label a diagram of a vulva, in which 58% of people could not describe the function of the urethra, 47% did not know the function of the lips and 52% did not know the function of the vagina. When this lack of education regarding female anatomy extends to both men AND women, it is evident that the sex education systems currently in place around the world focus heavily on heterosexual men and leave women to fend for themselves. for their sexual satisfaction.

Due to the many factors that influence society’s lack of understanding of female sexual pleasure, women have found themselves sexually dissatisfied in their relationships. This is a strong indicator of the extent of the orgasm gap when heterosexual women have been thoroughly socialized to set aside their own sexual desires or desires to center their male partner’s orgasm. How many times have women, in the heat of the moment, been encouraged to say whether they felt sexually satisfied or not? How many times have heterosexual men engaged in sex only to propel their own orgasm while completely ignoring their partner, essentially using the female body for pleasure only? Why have women been encouraged to fight societal inequality but not the sexual inequality that makes their straight relationship unsatisfying? As a collective society, we must not only begin to ask these critical questions, but also reassess the standards we hold for our male partners and learn to expect more from relationships than the bare minimum.

Emotional dissatisfaction – Women who bear the brunt of emotional labor

In their journal article focusing on emotional labor in heterosexual relationships, Jean Duncombe and Dennis Marsden explain how many of the root causes of dissatisfaction and conflict in heterosexual relationships stem from the unequal distribution of emotional labor within the relationship, with women doing the majority of the work. work. In their study, they concluded that “most of our female respondents felt that their male partners lacked what might be called ’emotional participation’ in their relationships”. Emotional involvement can take the form of disclosing the emotions they feel, an inability to share vulnerable emotional moments, and a general lack of emotional effort.

In turn, many women reacted to this lack of shared emotional labor by “comparing their relationships to the worst possible scenarios,” such as a partner who drank heavily or a partner who was physically abusive. Because their relationship was not “as bad” as other relationships they compared themselves to, many of these women “blame[d] themselves for wanting too much” and settled for men who did not meet their emotional needs. It further demonstrates the extent of emotional inequality within heterosexual relationships, where women take responsibility for their dissatisfaction rather than holding their partners to higher standards of emotional intimacy.

But what might this unequal division of emotional labor have to do with how we socialize young men and boys? As Duncombe and Marsden explain, men are generally less able to think and speak in terms of “love” or “intimacy” because of differences in how we allow boys and girls to have childhood emotions. Many boys are confronted with the stereotypical ‘boys don’t cry’ narrative, which promotes suppressing their emotions to appear outwardly ‘strong’ (thereby creating a negative association between emotion and weakness). As they grow up, their male-dominated friend groups avoid discussions about feelings or emotions because it wasn’t “normal” to have these conversations as young boys. Thus, in adulthood, many men who have been protected from being properly socialized to emotionally are doomed to failure in heterosexual romantic relationships. As one of the men interviewed in the study admitted, “’I want to change, but I don’t know how’”.

Where do we go from here?

It is clear that there is a direct correlation between the way we socialize our young men and boys, and the subsequent dissatisfaction experienced by women in relationships with men. Therefore, one of the best ways to quell this epidemic of dissatisfaction in heterosexual relationships is to socialize new generations of men and boys to understand what we know to be true: men, in fact, have emotions and experience them, boys should be encouraged in healthy environments to be moved and emotions are not a form of weakness but a source of strength for strong interpersonal relationships. Additionally, sex education programs need to be restructured to ensure that both men and women are properly educated on basic genitalia (which should already have been the norm). To go further, high school sex education curricula should be encouraged to include lessons that emphasize the importance of mutual pleasure in sex and sexual equality. Finally, it is essential that we collectively reevaluate our standards for our partners in long-term relationships. Settling for dissatisfaction only reinforces the toxic belief that things are as they are today. should be, and it hinders what could be a wonderful opportunity to raise our collective standards of partnership. Only when we properly equip our men and boys with the tools they need for successful relationships will we finally overcome the hill of sexual and emotional inequality in heterosexual relationships.

Sophia Lehrbaum is an opinion columnist and can be reached at [email protected].