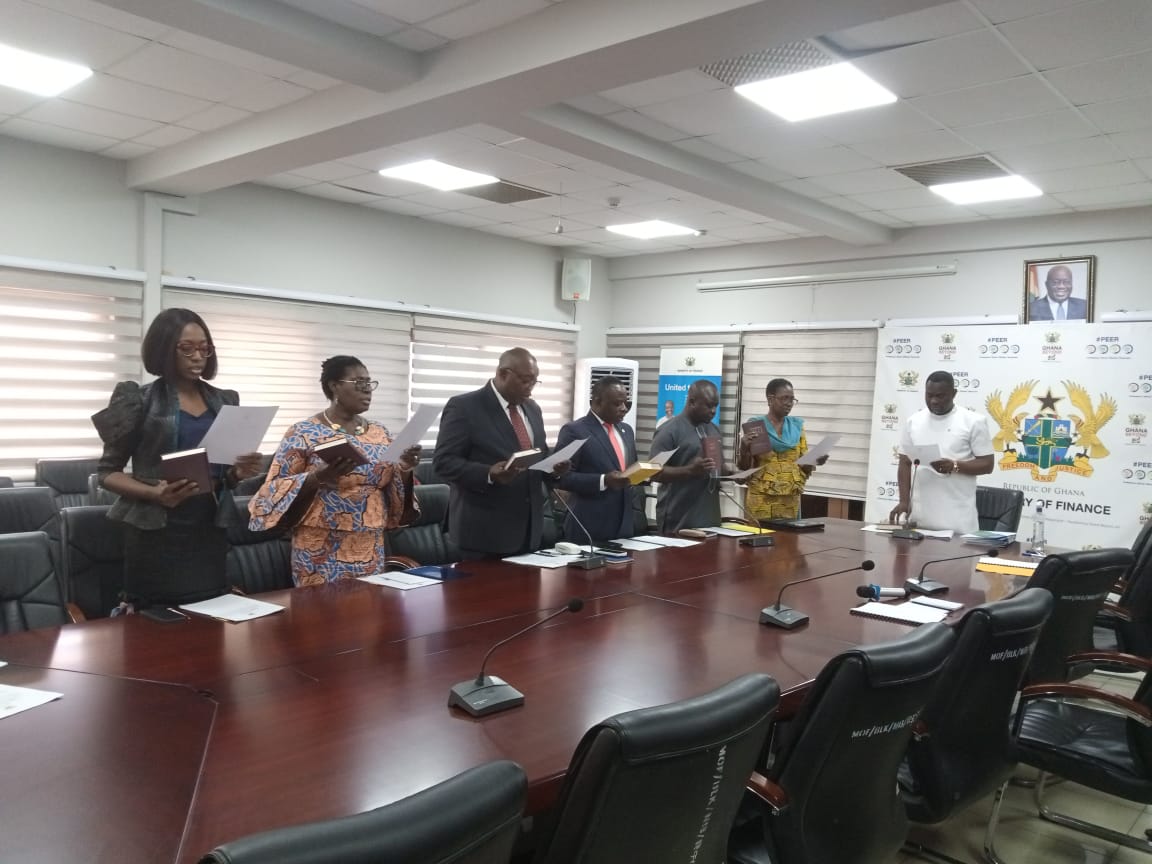 The Deputy Minister of Finance, Dr. John Kumah inaugurated the Board of Directors of the Ghana Statistical Service on Thursday.

He instructed the members to provide the necessary advice and assistance to the management of the service.

The Deputy Minister further asked the Board, among other things:

(i) Work to expand the establishment position of the Service by ensuring that experienced senior officers lead the production of statistics;

(iv) Facilitate work within the National Statistical System and,

(v) Initiate the process of drafting the legislative instrument of the Statistical Services Act, 2019: Act 1003

In a short ceremony, the Deputy Minister of Finance, on behalf of the President and the Minister, expressed the Ministry’s gratitude to the former council for their wonderful guidance which resulted in the completion of the first digital census in Ghana. .

He remarked, “We were impressed with the release of the interim results within 44 days of completing field data collection. Now we are guided by the most recent data to carry out analyzes within the ministry”.

He also thanked the government statistician and his team for working tirelessly and smoothly without a board for the past five months, noting that “today’s inauguration of the board would accelerate the pace of growth and of development, as well as industrial harmony in the Service.”

The inaugural ceremony was held in accordance with Section 5(2) of the Statistical Services Act 2019: Act 1003 which mandates the President of the Republic, in consultation with the Council of State, to appoint the members of the GSS Board of Directors.

The Council, he said, is relatively small although it is made up of people with specialized and diverse knowledge of statistical production and human resource management. These two key competencies, he noted, are needed in the transformation agenda undertaken by the outgoing Board, which would enhance the status of ESG in the international statistical ecosystem.

The Minister was of the view that Ghana was recovering rapidly from the impact of COVID-19 according to quarterly and annual GDP growth rates released by the Statistical Service, and said that as a country, ”we strongly encourage continued leadership of staff to provide high quality statistics to guide the growth and development of the country, as set out in the coordinated program for economic and social development policies.”

The Statistical Service has launched the Annual Household Income and Expenditure Survey (AHIES) which will soon provide the country with quarterly data on the active population, quarterly multidimensional poverty and the state of vulnerability. Data that would inform policy-makers, academia and research as to whether the country’s programs and policies are having a positive impact on the population.

Since the government needs to know the results of various government policies, he pledged government support to the Service in every possible way to reorganize it to achieve its core mandate of providing quality, relevant, accurate and reliable statistics. appropriate for development purposes.

The Deputy Minister reminded the Council that the country relies heavily on the Statistical Service to generate accurate and timely data to report on the Sustainable Development Goals and the African Union Agenda 2063 and tasked the Council to lead the country in this direction in order to promote the effective use of statistics and stimulate research activities.

He promised the Council that the government will find the necessary resources to facilitate their work as there is a growing demand for credible data for evidence-based decision-making. He further added that the government, through the World Bank, had provided the Service with $150 million to conduct the census and to harmonize and strengthen data collection systems in Ghana and seven West African countries.

However, the Deputy Minister acknowledged that a considerable amount of this money was spent on the 2021 Population and Housing Census; the Board should ensure the effective use of remaining resources as other initiatives are explored to financially strengthen the Service.

The Deputy Minister concluded his remarks by assuring the Council of Government’s support and availability to provide the necessary resources, both human and financial, to enable them to succeed in their national mission.

Responding on behalf of the Council, Dr. Grace Bediako remarked that they considered it an honor to be called upon to serve the country as Council members and indicated that they were ready to meet the expectations of them. She therefore called on all MDAs in the national statistical system to cooperate with them to achieve their goals.

Dr. Bediako holds a doctorate in demography from the University of Philadelphia. She had a working relationship with the United Nations Statistical Commission in various capacities until she joined the Statistical Service in 2004 as a government statistician.

She worked at the GSS for a period of eight years before joining the NDPC as an advisor and ending her tenure as ag. NDPC Commissioner General.

In 2017, she was appointed Chair of the GSS Board of Directors and remained in the same position to ensure continuity of service. Dr. Bediako is an alumnus of the University of Ghana.

Professor Annim has been a government statistician since March 2019 and has distinguished himself since then.

He joined the Service at a time when it was burning to finalize the census processes. He holds a doctorate. in Economics from the University of Manchester and has spent his professional life teaching economics at the University of Cape Coast and other higher education institutions.

At Cape Coast, he held various positions ending his engagement as Director of Research, Innovation and Consulting. He is an alumnus of the University of Cape Coast.

Ms. Akrong is an award-winning HR practitioner who has worked in various Fortune 500 companies in the US, UK and Africa. She is currently the Human Resources Manager of Vodafone Ghana.

Dr. Aggrey-Darko is currently Chief Director of the Department of Parliamentary Affairs.

She holds a doctorate. in African Studies and is currently Director of the Confucius Institute in Legon.

She has more than 24 research publications to her credit.

Professor Osei is an Associate Professor at the Institute of Statistical and Social and Economic Research and is also Dean of Graduate Studies at the University of Ghana.

Robert is currently a board member of Stanbic Bank Ghana Limited and co-chair of a new initiative known as the Digital Agricultural Innovations and Services Initiative, jointly managed by J-PAL (based at MIT, USA) and the Center for Effective Global. Action (based at UC Berkeley, USA).