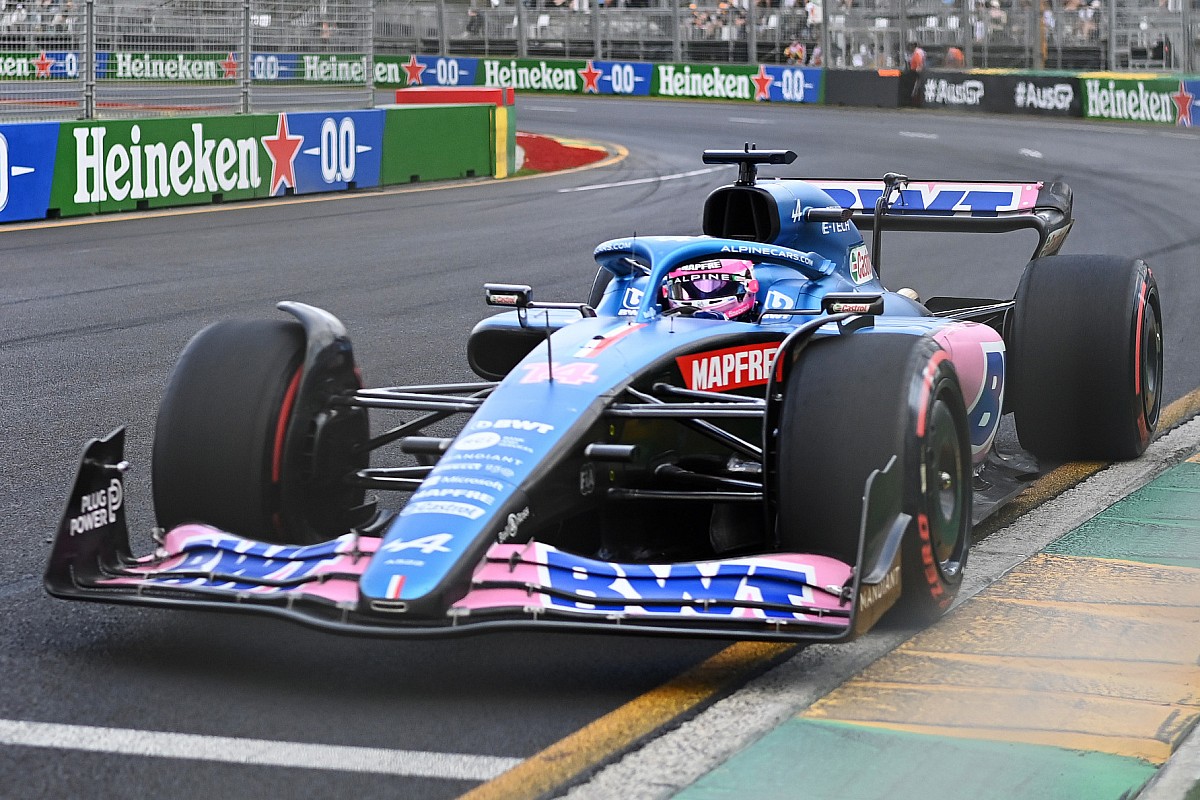 For some teams the removal of the fourth DRS zone made no immediate difference, but for others – notably Aston Martin – it led to last-minute fumbling to alter the car’s configuration accordingly, triggering a chain of events that led to a disastrous qualifying session for the Silverstone-based team.

The way the loss of the DRS area came about was unusual, with some rivals suspecting that some skillful play by wily old fox Alonso had paid off in favor of the Alpine team.

The DRS area in question was that of a rebuilt portion of the track from Turn 8 to the bend of Turn 9.

During Saturday’s driver briefing, Alonso suggested that with the DRS open, this section of track was a little too dangerous for comfort, and that perhaps the area should be abandoned for safety reasons.

He was the main voice in the discussion with race director Niels Wittich, and by all accounts there was little input from other drivers.

Wittich took Alonso’s point on board and, around 10 a.m. Saturday morning, he sent a note to the teams asking if they agreed there were potential safety issues with the DRS area. The teams had one hour to respond with their views.

Engineers up and down the pit lane therefore had to discuss the matter, and inevitably – this being F1 – alongside any safety considerations, the implications for the competitiveness of their own cars were also part of the equation. .

It wasn’t a vote as such, but in the end five teams expressed support that there was a security issue, and five said there wasn’t.

After taking the responses into account, Wittich sent the teams a note at 12:40, just 20 minutes before the start of FP3, confirming that the DRS zone of Turn 8/9 had been removed.

His message read: “For safety reasons, DRS zones will be reduced to 3 for the rest of the event. DRS detection 1 will be moved before turn 9, DRS activation 1 will be after turn 10, DRS 2 detection will remain unchanged, with subsequent activation zones being renumbered accordingly.”

The loss of the zone had two potential points of impact on the teams and their relative competitiveness.

First, some cars have more effective DRS than others, so they gain more every time the DRS is opened on a flying lap in qualifying. Deleting one of the zones would therefore potentially cost them a turn advantage that they had enjoyed on Friday.

Second, an open DRS counteracts bouncing or porpoising, and given the curved nature of this section of track, not having that issue on a low-flying fuel lap was obviously beneficial to teams that suffer the most.

By removing the DRS bounce, the “healing” teams had to either live with it or find another solution. And that’s what Aston Martin felt compelled to do, increasing the rear ride height, the standard way to get rid of the bounce.

This last-minute setup change meant Aston Martins came out late in FP3, and when they took to the track Sebastian Vettel and Lance Stroll crashed, sending the team’s fortunes on a downward spiral.

On the other hand, Alpine found performance in FP3, with Alonso taking fourth place. It hasn’t gone unnoticed that rebounding hasn’t been a big deal for the Enstone team lately. Was it a coincidence that the man who called for the elimination of the DRS zone now had a more competitive one-lap package?

Some rivals certainly believed there had been a bit of play from the Spaniard, and that indeed he had played the system, although curiously team-mate Esteban Ocon didn’t seem to get the same out of it. advantage.

During the break between sessions, Motorsport.com came across Alonso and joked that he had done a good job on the DRS zone, and he replied with a “Who, me?” smile.

In qualifying he found even more speed, and he even looked destined to fight for pole before a hydraulic problem sent him off the road in Q3 after setting the second-fastest sector.

After the session, he regretted his bad luck and the missed opportunity, and when asked about the conversation during the pilots’ briefing, he protested his innocence.

“Generally, Turn 9 had enough corners to fight wheel-to-wheel tomorrow with the DRS open,” he said. “So I think the FIA, for safety reasons, decided to stop him.

“I know you said it helped Alpine, but Esteban struggled in Q1, Q2, and otherwise we were first and second, so I don’t think it had a huge impact on the team… “

Others took a more cynical view. Several drivers also lamented that the removal of the zone will also have an impact on overtaking in Sunday’s race.

Red Bull has a particularly effective DRS, and so the loss of the zone has potentially cost its drivers lap time compared to its rivals.

“There was only one team that complained about it and they were taken off this morning,” Max Verstappen said, referring to Alonso in the briefing rather than the team’s subsequent responses.

“So I don’t really understand because for me it was a lot easier than doing it, for example, in Jeddah because there were a lot more corners.

“For me, there was never a problem driving there with the DRS open. So yes, you have to ask the FIA ​​why they removed it. It’s a shame, because it would have helped the race .”

McLaren, like Alpine, a team that has mastered the problem of porpoising, appeared to win over its rivals, with Lando Norris finishing fourth on the grid. However, when asked about Alonso’s safety campaign, the British driver said he would have been happy to see the DRS zone remain.

“Honestly, I don’t think he needs to be taken down at all,” he said. “If you compare him to the Saudi for example, you shoot just as many Gs in terms of cornering there, and it’s just as fast as here. I think that’s fair – if there was a chance, they would because they are very quick on the straights and it benefits the Alpines a lot because of that.”

Norris agreed losing the zone would not help with overtaking, although he still expects to see some action: “I think it will make the race a bit worse. That’s a fact. You you might not see so many trains and stuff like that. But I don’t see any reason why the race is going to be bad all of a sudden.

“I think there will still be a lot of opportunities, it’s still a long straight, it’s just not the DRS.”

The DRS saga also highlighted a big picture of how race director Wittich does things, already seen with his focus on drivers not wearing cockpit jewelry, and more embarrassing penalties handed out during workouts.

While dialogue between race management and teams on safety issues is normal, the actual team “voting” process on DRS safety was seen by some observers as a bit more unusual. Granted, the 20-minute notice of FP3 frontcourt removal was hardly ideal, and not just for teams. Formula 1 estimated it needed around 40 minutes to remove the zone from its timing and information system before the session, and in the end it had half that time to do the job.

However, while conceding the late notice wasn’t great, McLaren boss Andreas Seidl had no issues with the process Wittich used.

“At the end of the day, you have the forum of the driver’s meeting and the team manager’s meeting as well as the direct dialogue with the race director on any issues you see during a race weekend,” said the German.

“So any team can bring it up at any time. And then depending on the subject, from my point of view, it’s up to the race director to see how he wants to deal with the subject, if he wants to consult the whole teams as he did today.

“But in the end he will make the decision for security reasons, which he can do at any time. From that point of view, I don’t really see a problem.”

Sunday will tell us how good the race will be compared to years past, even with a missing DRS zone.

After his crash in Q3, Alonso is worth watching as he attempts to progress from 10th on the grid. The irony is that an additional DRS zone could have helped him pass more easily…

Five New Trustees Appointed to the Palomar College Foundation Board