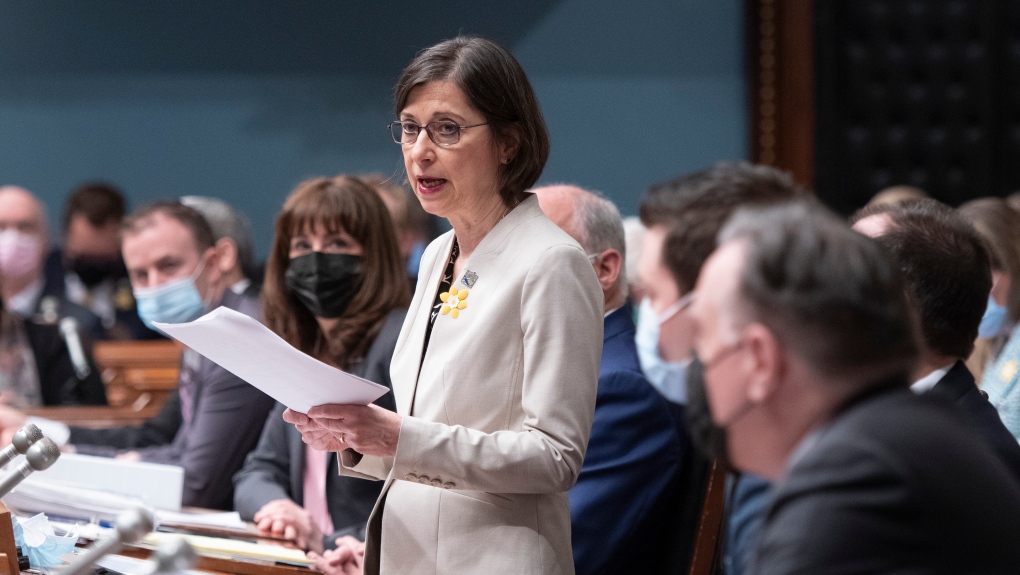 The leader of Concordia University’s Black Students’ Union criticizes the Quebec government for introducing a new bill that would allow professors to freely use racial slurs in the classroom.

“I think it’s a slap in the face for the students,” said union president Amaria Phillips.

Phillips said she fears the bill will traumatize racialized students in light of previous cases of teachers using racial slurs during lessons.

Quebec Minister of Higher Education, Danielle McCann, on Wednesday tabled Bill 32 aimed at promoting academic freedom, which the bill defines as: “the right of every person to engage freely and without doctrinal constraint , ideological or moral to an activity by which it contributes, in their field of activity, to the achievement of the mission of such an educational institution.”

“Censorship has no place in our classrooms…we need to protect teaching staff from censorship,” she said.

“In fact, we will be able to use any word within the context of pedagogy, academics, and obviously ethical standards, scientific rigor,” McCann added.

Verushka Lieutenant-Duval, a part-time professor at the University of Ottawa, was suspended in September 2020 after using the N-word during a class discussion about art and gender.

She later apologized, but colleagues who were pushing for her reinstatement said banning the use of the word would limit their ability to teach some of the literature by Quebec writers who use the term.

The suspension sparked heated debate in Quebec. The province created an academic freedom committee in response to reports of professors in the province avoiding teaching controversial subjects for fear of being confronted by students.

The committee released a report last December that said post-secondary classrooms should not be considered safe spaces and that trigger warnings should not be used in the classroom.

With the introduction of the Academic Freedom Act in the university sector, Phillips hopes there will be more attention on black history in university classrooms, rather than slurs.

“A lot of [teachers] they don’t even really teach what it means to say the N-word and the impact it has had in the past and in the present, they just say it for fun,” she said.

“We’ve heard many stories … in Montreal that have happened with teachers saying it on purpose and it’s like it’s not even being said for the purpose of education like they claim.”

Nearly 30 student unions across Quebec signed a joint statement on Wednesday calling the bill an “attack” on educational institutions.

“This is a call for repression of the student community and a populist way to rally people against progressive ideas,” the statement said. Student unions said the bill instrumentalizes academic freedom to claim the right to make discriminatory or provocative remarks.

“Academic freedom does not protect the right to say anything,” the statement said. “Rather, it protects the rigorous pursuit of knowledge, the pursuit of a just and egalitarian society, and the challenge of power by scholars.”

If passed, universities would have one year to create an academic freedom policy and a board to oversee any complaints filed.

Minister McCann was asked Wednesday how she can defend the use of such slurs in the classroom and she responded by saying the bill would protect racialized students.

“It is a very important question because I am very sensitive to these students. It is in their interest to have this bill because I think that universities have a very important role in society and students. .. I meet them regularly and I understand. But at the same time we have to preserve the learning. It has to be of high quality. They have to be able to debate and that’s why academic freedom is so important for them too to debate of these topics,” McCann said.

“When you talk about a book where there is a word that may shock you, well, there should be dialogue about it.”

If passed, Bill 32 would also require universities in Quebec to appoint a person responsible for implementing the policy and would give the government the power to make corrections to the policy of a university deemed not to be. compliant.

The current session of the National Assembly ends in June.

2022 presidential election in France: the campaign ends with an uncertain result