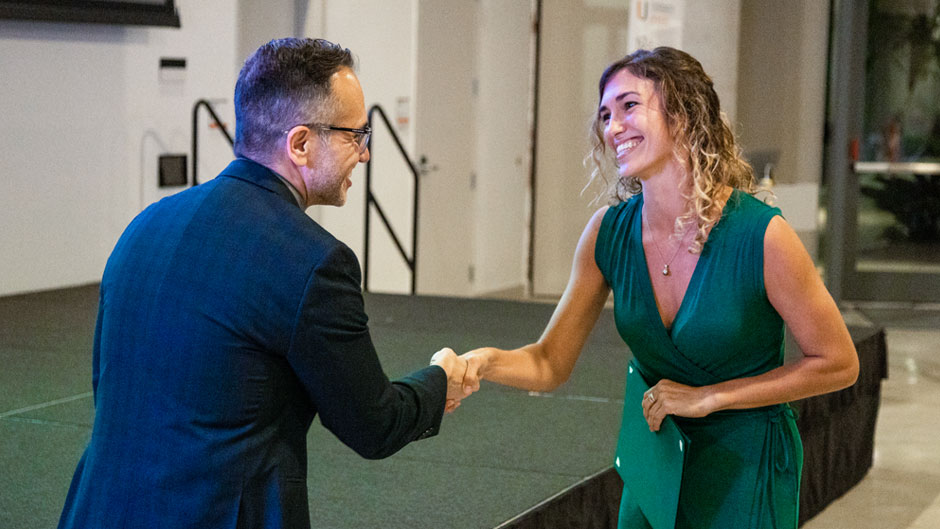 Hosted by the Graduate School in partnership with the Graduate Student Association, the sixth annual Three-Minute Thesis Competition showcased the spirit and brevity of the University of Miami’s research-based doctoral and master’s degree programs.


Ten daring students put their research communication skills to the ultimate test in the sixth annual Three-Minute Thesis Competition, an event presented by the University of Miami Graduate School in partnership with the Graduate Student Association.

In just three minutes, each contestant presented condensed versions of their scientific research with a single PowerPoint slide displayed behind them as a visual aid. Competitors pitched their work to an audience and a panel of judges, including Jeffrey Duerk, executive vice president for academic affairs and provost; Rodolphe el-Khoury, Dean of the School of Architecture; Kelly Miller, associate dean of learning and research services at the University of Miami Libraries; and Devang Desai, Alumni Association President and Board Member.

Guillermo “Willy” Prado, vice provost for faculty affairs and dean of the Graduate School, was also present at the Thursday evening event which returned to an in-person format after being presented virtually last year.

Liz Williamson, a PhD candidate in marine biology and ecology at the Rosenstiel School of Marine and Atmospheric Science, won first place and the audience award in the annual competition for her presentation, “Testing Strategies to Enhance in Caribbean Coral Juveniles for Reef Restoration.” .

“As someone who loves animals and nature, I think I was drawn to coral reefs because they are so beautiful and because they are so urgently threatened by climate change. so they are the canaries in the coal mine,” said Williamson, whose adviser is Andrew Baker, associate professor of marine biology and fisheries.

Williamson’s research focuses on testing approaches to improve the stress tolerance of juvenile corals to help future generations of corals withstand climate change and warming oceans. Not only is she enthusiastic about saving coral reefs, but alongside this work, she is interested in making marine science research understandable to the masses.

“I’m my lab’s outreach coordinator and I do a lot of public speaking and public tours and I just try to say things about marine science that are understandable and digestible for the public,” Williamson said. “I thought it would be a great way to practice this in a formal and succinct way. It was a challenge.

Joan Brown, a master’s student in global health and society, was a finalist in the competition. His research was titled “Ethnicity has no effect on prostate cancer mortality among black men living in Broward County, Florida.”.“This project is near and dear to Brown’s heart.

“My husband is a footballer and he is 60 years old,” she explained. “All his friends have prostate cancer. In my family alone, about seven men have been diagnosed with prostate cancer. So, I knew it was something I could do to have a positive impact on my community.

Brown’s topic explores the effect of ethnicity on the incidence of prostate cancer in men of African descent living in Broward County, Florida.

“I entered the contest because I wanted my research to be explained in a clear and concise way, so I could reach as many people as possible,” said Brown, who hopes her research will open doors for others. researchers to better understand why this health disparity. exists and is so misunderstood.

Without a hitch and in stride, the eight other students in the competition succeeded in highlighting and presenting their research in a unique and original way. The Doctoral School team, the judges and the spectators congratulated each participant during the networking reception which followed the competition.

The Three-Minute Thesis Competition is an internationally renowned event designed to hone the critical thinking and communication skills of graduate students to a wide audience.

Williamson received a $750 prize and Brown took home $350 as the runner-up winner. To learn more about the competitors’ research and the annual competition, visit the Doctoral School website.

A Scholar of Stalin Discusses Putin, Russia, Ukraine, and the West