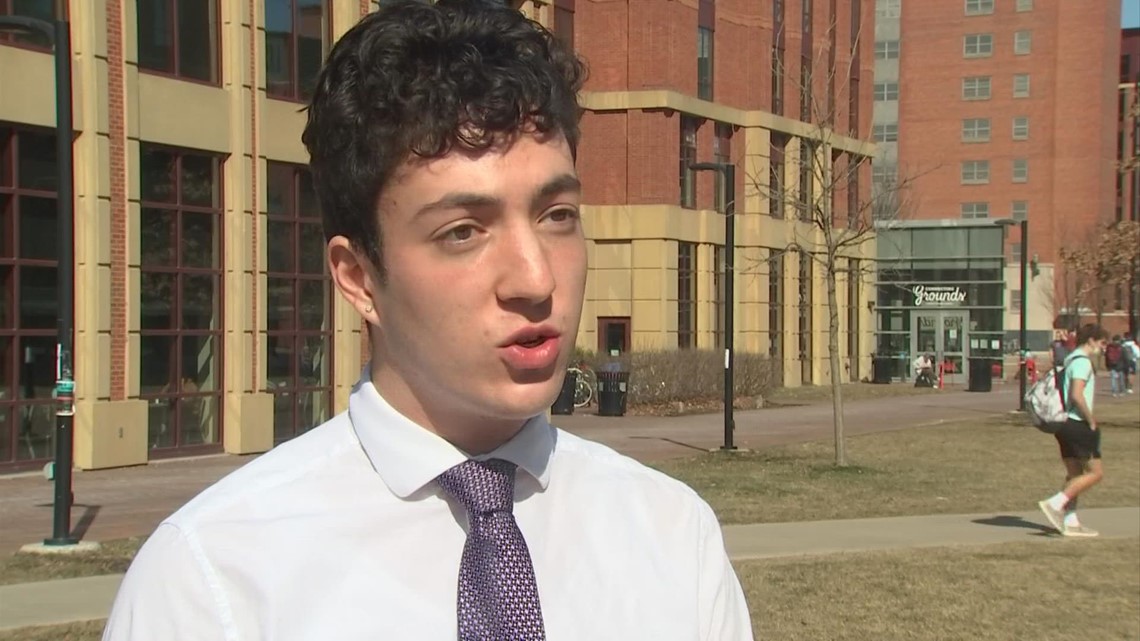 OSU Student on the Ukraine Crisis: Separating People from Politics

Alex Grosman’s family has ties to Ukraine, but he grew up speaking Russian. This is just one of the reasons why he joined the association of Russian students at OSU.

COLUMBUS, Ohio — Alex Grosman is a first-generation college student. And one of the first things he did when he arrived on the Ohio State University campus was to join the Russian Student Association.

He said he wanted to connect more with his culture and connect with others with similar backgrounds.

As for him, his parents and grandparents are from Ukraine and lived there when it was still part of the Soviet Union. Grosman grew up speaking Russian. But he says his family came here for a reason.

“There was a lack of economic opportunities available to them in the Soviet Union, and that was true for a lot of Russians and people living in the Soviet Union, but especially for them because they were Jewish, so it It was also due to religious persecution, which is why so many students from the Russian Student Association are Jewish, myself included,” he said.

Grosman admits that when he first heard about Russian President Vladimir Putin’s plans to invade Russia, he thought it was a bluff. He soon learned, like the rest of the world, that Putin was not making empty threats.

“I was convinced that there would be no way for Putin to have the real intentions of invading Ukraine, but to see this tragedy unfold, I mean, it’s very shocking to hear, and c It’s very devastating, especially considering myself and many other club members and leaders still have family in Ukraine,” he said.

Grosman has been in contact with his family there, and he says everyone is still safe as they are in an area not yet directly affected by the conflict. They are currently trying to get to Israel or maybe Romania.

“My family is entirely Jewish, and Russians are known to be particularly brutal towards Jews, which is why much of the Jewish community in Ukraine is preparing for what they believe will be brutal and horrific attacks on their community, if Russia gets their way communities,” he said.

He says this history of violence and fear is what has driven many people to flee to the United States. And he means very clearly that the majority of Russian Americans most likely strongly oppose the invasion of Ukraine.

“Those who come from the former Soviet republics, their families and their countries have all been victims of Russian colonialism, so most of them are openly against this invasion,” he said. “And, for those who come directly from Russia, I would say the majority of them are also against it, because they see Russia and Ukraine, although they were part of the same country once, they see them as having their own separate cultures. and their own rights to govern themselves separately. So many Russian Americans are against this invasion, as a whole, and I would say the only ones who support this invasion are those who enjoyed life in the Soviet Union , which are very few among Russian Americans, which is why there are so many Russian Americans here in the first place because they escaped the difficult life they faced in the Soviet Union.

Despite this, threats have been made against companies with ties to Russia. Earlier this week. 10TV reported threatening phone calls to Diana Deli, who is in Columbus near Worthington. It is owned and operated by two people – one from Ukraine, the other from Russia.

“Just because someone is Russian or Russian-American doesn’t mean they support this horrible invasion,” Grosman said. “In fact, the fact that they are in this country in the first place probably shows that they are against such Russian policy in the first place because they understand what it is to be a victim of the state Russian. For anyone who thinks that being Russian or Russian-American equates to supporting this invasion, I’d say that’s a completely false connection to make.

In fact, he and the other members of the Russian Student Organization recently joined the OSU Ukrainian Society Bake Sale to raise money for humanitarian aid.

“We all stand in solidarity with Ukraine, and we hope to continue to raise awareness and do what we can to continue to collect charity and needed aid to send to Ukraine,” he said.

North West health insurance useful for some, useless for others