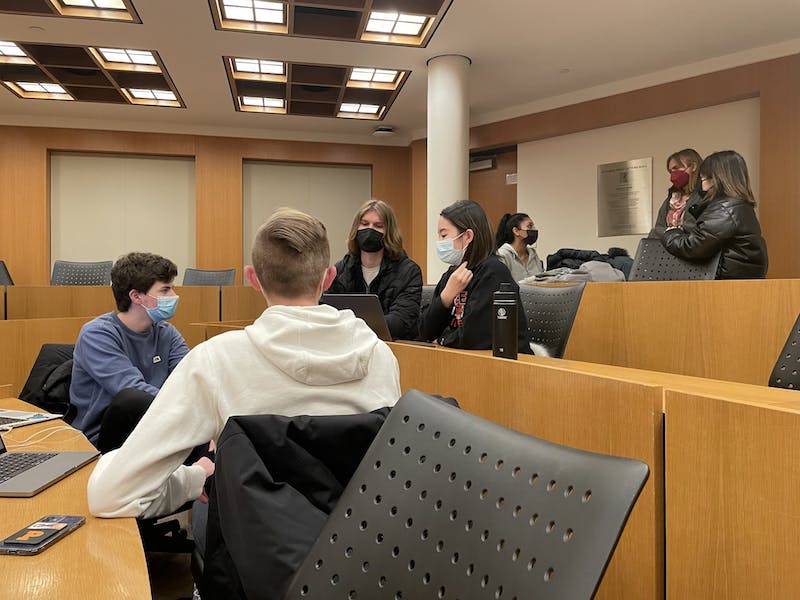 USG discusses focus on mental health for next term

Ahead of this week’s meeting, USG President Mayu Takeuchi ’23 asked each member of the senate to think about mental health-related initiatives that fit within their specific committees and task forces.

This request from Takeuchi arose from one of his campaign promises. As a candidate, she promised an increased commitment to focusing on mental health in all areas of USG.

“Mental health is more than CPS [Counseling and Psychological Services]. We want to take a holistic approach that draws on all of our different roles and we want to promote them all together,” Takeuchi said.

USG representatives convened in groups to share ideas, including using the USG platform to increase student engagement in non-academic activities, implementing survey recommendations on the health of the last semester, the expansion of the CPS and the improvement of communication between various resources such as the CPS, the university health services. (UHS), Directors of Student Life (DSL), and Boarding School Counselors (RCA).

Campus and Community Affairs (CCA) Chair Isabella Shutt ’24 suggested advocating for a role within residential colleges to “facilitate community and mental wellness” that is separate from DSLs. , who serve as a resource for students but are also responsible for disciplinary action.

“It shouldn’t be entirely the responsibility of RCAs or DSLs,” Shutt said, emphasizing the importance of supporting staff in their work to care for student mental health on campus.

Along the same lines, Luch stressed the importance of not only mitigating mental health issues, but also “removing the sources” of impostor syndrome and other issues affecting the mental health of people. students.

U-Councilor Carlisle Imperial ’25 weighed in on the distinction between cases of mental health issues and the academic challenges associated with college.

“Certainly there are some aspects of college that are unnecessary, that cause us undue stress and potentially heighten anxiety,” he said.

Get the best of ‘the prince’ delivered straight to your inbox. Subscribe now »

“But at the same time, we are in college and we are in an extremely difficult institution, you have to remember that. So I’m very hesitant to advocate for something that will facilitate our learning experience, our growing experience,” he continued. “But I will 100% support something that will facilitate a culture around mental health where we feel comfortable saying, you know, this school is tough.”

Academics Chair Austin Davis 23 also spoke about the importance of having “honest conversations” about student experiences.

Referencing the Princeton Perspective Project, an initiative affiliated with USG and ODUS that aims to build student resilience and realistic expectations, Davis said, “What’s going on with [it] right now it would be really interesting to see how we can have more conversations about the fact that there is no such thing as a perfect student at Princeton.

Lehman Montgomery ’22 of the Student Group Recognition Committee (SGRC) has presented a new student organization, Princeton Blockchain Society, for approval by the Senate.

Montgomery said the SGRC initially feared the band’s endorsement “might duplicate Blockchain at the Princeton Club.” However, he went on to explain that the SGRC realized that there is a significant enough distinction between the two to warrant separate groups.

“Blockchain at Princeton is more than a [startup] incubator aligned with the Entrepreneurship Club [while] The Princeton Blockchain Society is more focused on education and research,” Montgomery said.

All voting members voted to approve the formation of the new club.

The Senate also voted unanimously to approve a funding request for the MSA to host a Spring Ceremony as part of the Ramadan celebration. $1,500 of the $2,000 request will be provided by the USG Project Council, with the remaining funding to come from the Office of the Dean of Undergraduates.

“This is an important time for us to come together as a community,” MSA representative Muskan Effendi ’24 said.

The meeting concluded with a presentation from Imperial and Ned Dockery ’25 on the topic of survey techniques and data collection. The duo collated ideas on how best to get student feedback and minimize response bias in surveys.

USG Senate meetings are held in Robertson Hall 016 at 8 p.m. Sunday evenings and are open to all.

Annie Rupertus is a Philadelphia freshman and news writer who covers USG for “The Prince.” She is also designer for the print issue. She can be reached at [email protected] or @annierupertus on Instagram and Twitter.

Great with giants!’ By Yomi Badejo-Okusanya