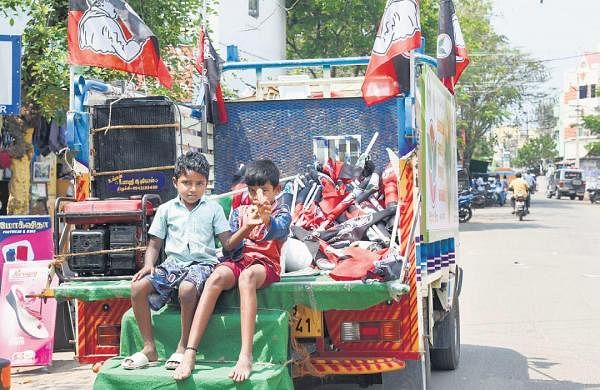 Groups of students campaigned for the candidates of the main political parties in order to collect the votes of the voters at the polling stations.

PN Pudur students in the city said that if they campaigned by holding party flags with frames in the morning and evening, they earned Rs 500 per day and had been doing it for a week in the vicinity.

The education development committee coordinator, K Leninbarathi, told TNIE: “First of all, parents and party leaders must understand that they are children until the age of 18, under the Majority Act of 1875. Such activities would be considered child labor and their education would be affected.”

T Arulanandham, State Treasurer of the Tamil Nadu Government High School and Secondary Education Graduate Teachers Association, told TNIE, “Due to the misdirection of party cadres during the campaign, the students, mostly teenagers, can indulge in bad habits such as alcohol, smoking, etc., and their future could be ruined.Parents should advise their children not to campaign.

He added, “Even after we educated them about the disadvantages of campaigning, some students still enjoy campaigning.”

A Coimbatore District child protection officer told TNIE, “Political parties involving students for election campaigning is an offence. But we have not received any complaints. The election commission should order political parties not to involve students in campaigns and other work such as issuing cabin slips, verifying voter rolls, etc. We would bring this matter to the attention of senior officials to stop such activities in the future.