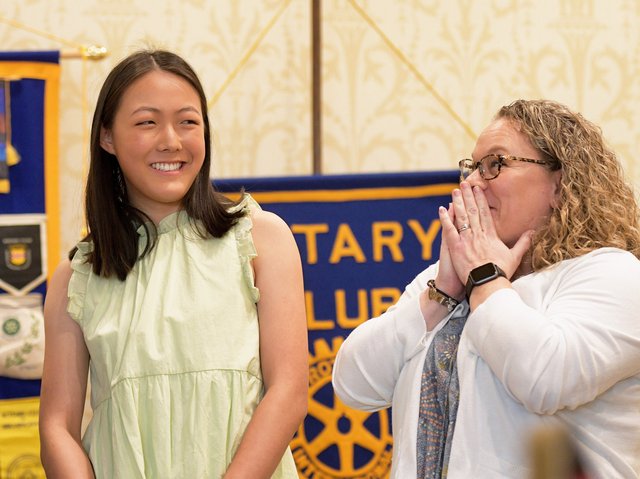 Evy Shen, who founded a new literary magazine, called Listen, for Statesboro High School, is now Bulloch County’s 2022 STAR student, after choosing Jennifer Calhoun, who is the faculty sponsor for the magazine, as STAR teacher.

The Bulloch County Foundation for Public Education and the Rotary Club of Statesboro, as local sponsors of the annual student-teacher achievement recognition program, on Wednesday recognized six pairs of STAR students and teachers from five county high schools. All STAR students are currently 12th graders with their school’s highest scores after just one sitting of the SAT college admissions test.

Shen, who scored 1580 out of a possible maximum 1600 on the SAT in the fall of her freshman year, is the 17-year-old daughter of Georgia Southern University civil engineering professor Junan Shen, Ph.D. , and Min Zhu, who takes care of Evy and her younger sister Erin, now in the ninth grade of SHS.

They also have an older sister, Julie, who lives and works in California, the state where Evy Shen, who also qualified as a valedictorian of 2022 from Statesboro High, will move this fall to continue her studies at the prestigious University of Stanford.

But Shen hasn’t decided on a career yet.

“Career-wise, I really keep my options open, and even when it comes to majors, I don’t limit myself to, like, a separate major,” she said after Wednesday’s STAR presentations. . “I’m really interested in a lot of things. I feel like at Stanford I will be able to explore more subjects and hopefully know what to specialize in.

Taking a similar approach to extracurricular activities in high school, she focused on STEM subjects — competing on the math team, for example — in ninth and senior years, then took a literary turn. She recently won a top prize for 12th grade writers in the Young Georgia Authors competition and is preparing to compete in impromptu public speaking.

“It’s called Listen Magazine because we wanted to encourage our student body to be open-minded and, like, receptive to other people’s perspectives,” Shen said.

The first edition appeared in print and online in the fall semester, and Listen is planned as a semiannual publication. Meanwhile, Shen is also playing tennis for Statesboro High, serving as co-captain of the school team in the season that just started.

When Shen was in 10th grade, Calhoun was her teacher for a year-long course called Advanced Placement Language, Composition and American Literature.

“Ms. Calhoun has been like a really transformative figure in my life,” Shen said. “I feel like in 10th grade I didn’t really know what I was doing, I was just kind of drifting off. , and then she was always so passionate about the things she was teaching, and that really pushed me to the things she was talking about.

Calhoun was previously a STAR teacher, when she previously taught in Screven County. She is in her 19th year of teaching and her sixth or seventh at Statesboro High.

The school year Shen was in Calhoun’s AP language class was the year schools closed for the last few months of spring due to COVID-19. Shen then joined Calhoun’s elective online class sessions for the rest of the semester and still scored exceptionally high on the AP test.

“And she’s just a wonderful human being, so when she approached me about doing the literary magazine, I was one hundred percent for it,” Calhoun said. “Evy’s passion for writing is contagious, and she’s definitely sparked fire in other students, which has been wonderful to watch.”

Before the county-level winners were announced at the Rotary Club luncheon, all STAR students and teachers from the five schools were presented called to the front.

Due to a tie, Bulloch Academy has two sets of STARs.

Bulloch Academy STAR student Tressa Rountree, daughter of George and Anne Rountree, has chosen Pam Sapp as her STAR teacher. Rountree has been accepted, by early decision, to the University of Georgia, where she plans to major in economics and take the pre-law route.

Sapp, currently an English language art and history teacher at Bulloch Academy, was one of Rountree’s teachers throughout middle school, from sixth-grade science to eighth-grade Georgia history.

Bulloch Academy STAR student Wesley Joyce, son of Richard and Shelly Joyce, has been accepted to the University of Georgia but is also considering other schools, possibly to pursue a degree in civil engineering. He chose Bulloch Academy high school math teacher Beth Burke as his STAR teacher.

Goodson, daughter of Lisa Schatzel Curl, plans to attend Mercer University and major in nursing with a minor in Spanish. Her goal is to become a pediatric nurse practitioner.

Thornburg is a science teacher at Portal Middle High, where Goodson was a student in his biology, chemistry, and human anatomy/physiology classes.

Southeast Bulloch STAR High School student Katlyn Brantley, daughter of Floyd and Kimberly Brantley, chose her mother as the STAR teacher. Dr. Kim Brantley, now a second-grade teacher at Nevils Elementary, was one of Katlyn’s teachers when she was in fourth grade.

Katlyn Brantley, who will also be valedictorian of Southeast Bulloch’s Class of 2022, has been accepted to Augusta University, where she plans to major in molecular biology. She hopes to be accepted into the Georgia Dental College, also at Augusta University, after her undergraduate studies are completed.

Trinity Christian School STAR student Mary Genevieve Williams, known as Mary Gen, daughter of Mike and Rita Williams, is also the salutatorian of her senior class. She hopes to attend the University of Georgia, but has been accepted by Georgia College & State University and has also applied to Georgia Tech and Georgia Southern. She is exploring medical and math majors and is also considering pharmacy or nursing school.

Williams has chosen Donna McKenna as the school’s STAR teacher for 2022. This is the sixth time that McKenna, who teaches AP calculus and AP physics at Trinity Christian, has been named a STAR teacher.

Statewide, the Professional Association of Educators of Georgia, or PAGE, Foundation sponsors the Student Teacher Achievement Recognition Program, now in its 64th year. In addition to having the highest SAT scores, STAR students must place in the top 10% or top 10 students in their class based on grade point averages at the end of the junior year.

Shen and Calhoun will represent Bulloch County at the Region 8 STAR Banquet sponsored by the Statesboro Exchange Club, March 16 at Georgia Southern. One STAR student and teacher from across the state will be chosen from winners from 11 regions and announced at the state banquet in Atlanta on April 25.

Hayley Greene, director of public relations for Bulloch County Schools, was emcee for the local STAR presentation and provided biographical information on students and teachers.