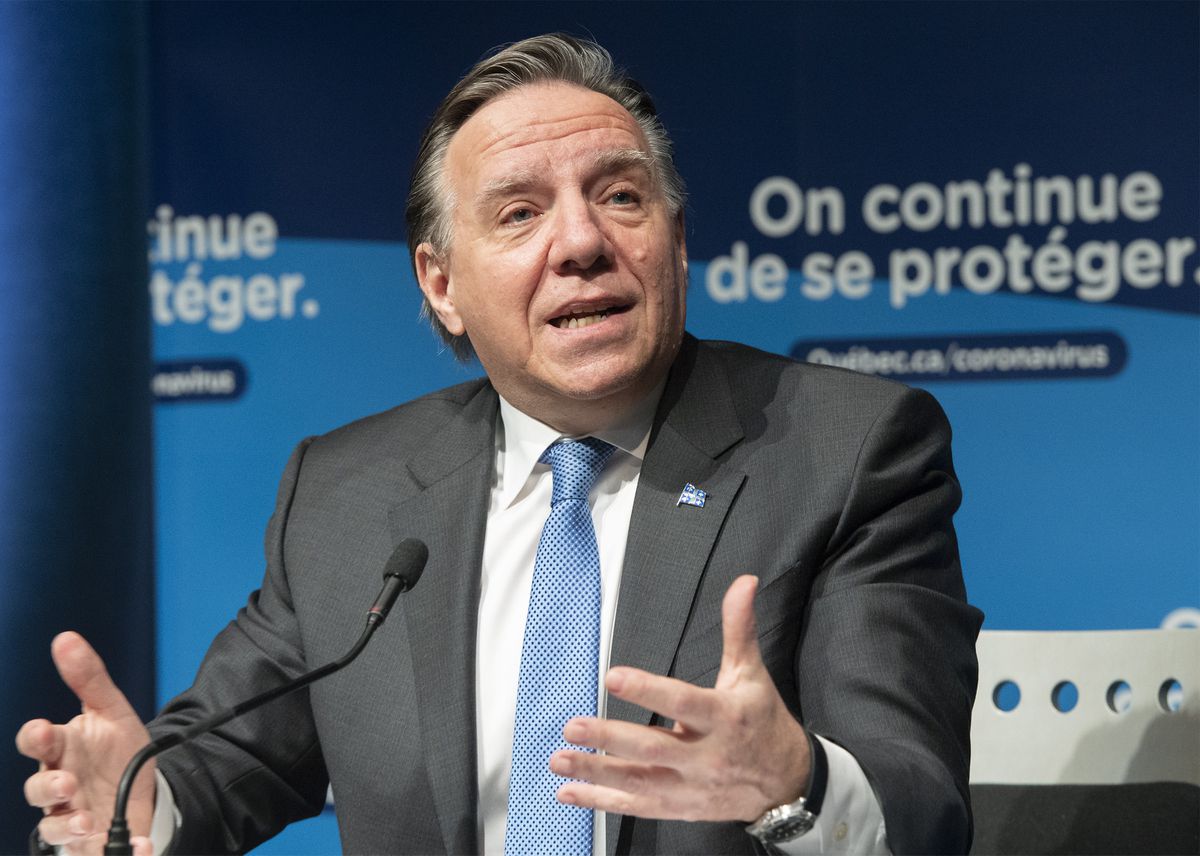 Policy briefing: A bill on the tax planned in Quebec for people who refuse to be vaccinated will be tabled in February, according to Legault

Quebec Premier Francois Legault said a bill on Quebec’s planned tax on people who refuse to get vaccinated will be tabled in February.

“There will be a debate in the National Assembly on the health contribution so that all deputies, all political parties can vote for or against and propose adjustments if necessary,” said Mr. Legault at a press conference Thursday in Montreal. .

Earlier this week, Legault said those who refuse a COVID-19 vaccination without a valid medical exemption will face “significant” fees which he says would be over $100. He said the province was working out the details.

The Quebec government’s plan has sparked debate across Canada, with questions posed to the federal government about whether it supports the idea.

Thursday, Mr. Legault said he wanted to clarify that his plan is not punitive.

“The intention behind the contribution is not to harm people who are in a bad situation,” the Prime Minister said, citing the example of homeless people or people with a disease that prevents them from living. getting vaccinated, or people with mental health issues.

“What we’re saying is that those people who choose not to get vaccinated, well, there’s going to be a price to pay because there’s an impact on society as a whole.”

This is Politics Briefing’s daily newsletter, written by Ian Bailey. It is available exclusively to our digital subscribers. If you’re reading this on the web, subscribers may subscribe to the Policy newsletter and over 20 more on our newsletter sign-up page. Do you have any comments? Tell us what you think.

NEWS OF THE DAY

CANADA UNITS WITH MEXICO ON US TRADE CHALLENGE – Canada is joining Mexico in opposing the way the United States interprets new rules that govern duty-free cars and trucks. History here.

SASKATCHEWAN PREMIER HAS COVID-19 – Saskatchewan Premier Scott Moe has tested positive for COVID-19. “I feel fine, but I will self-isolate and work from home for the next five days,” Mr Moe said in a tweet. History here.

PANDEMIC CAUSES CHANGE IN SENATE REOPENING – The pandemic caused a week-long delay in the start of Senate sittings this year, to February 8, but the House of Commons will resume as scheduled on January 31. History here.

COMMONS FINANCE COMMITTEE CALLING WITNESSES ON INFLATION – The House of Commons Finance Committee has unanimously agreed to call Finance Minister Chrystia Freeland, Bank of Canada Governor Tiff Macklem and the banking regulator Peter Routledge, among others, to testify at hearings on the causes of high inflation, a move that will keep soaring house prices and rising cost of goods high on the political agenda ahead of the next session of Parliament. History here.

PAYETTE RETAINS APPOINTMENT – Former Governor General Julie Payette will not lose her appointment to one of the nation’s most prestigious civilian honors. Story here of Radio Canada.

TOUCH CHOICES LOOM ON PM’S TRADITIONAL RESIDENCE – The choice around 24 Sussex Drive, designated as the Prime Minister’s official residence, is to spend $36.6million to renovate the crumbling building or $40million to demolish it and rebuild it. The National Capital Commission, the federal government’s property manager, described the building as being in “critical” condition. Meanwhile, Prime Minister Justin Trudeau and his family are living elsewhere, at Rideau Cottage on the grounds of Rideau Hall where the Governor General lives. The Toronto Star looks here to the situation.

The House of Commons adjourned until January 31 at 11 a.m. ET.

ETHICS COMMITTEE SEARCHING FOR DATA ANSWERS – The House of Commons Ethics Committee voted unanimously to invite Canada’s Chief Public Health Officer and Federal Minister of Health to to appear to help facilitate a study into the Public Health Agency of Canada’s collection, use or possession of Canadians’ private cell phone data without their knowledge or consent. The issue is detailed in a story here and a column by Campbell Clark here.

U.S. AMBASSADOR ON BEST CANADIAN BAGELS AND SOFT PRETZELS – The new U.S. Ambassador to Canada said on Twitter on Wednesday that he is a “really big bagel fan” and would welcome suggestions for Canadian bagels To try. “As a resident of Philadelphia for 50 years, my pre-Canada favorites are the freshly baked bagels of Famous 4th Street or the delicatessens of Schlesinger”, David Cohen – @US Embassy – wrote. Former federal environment minister Catherine McKenna responded by highlighting the ambassador’s challenge and highlighting the options of two Ottawa bagel retailers. Mr. Cohen, who arrived in Canada last month, has since widened his culinary appeal: “I also accept Canadian recommendations for one of my big favorite Philadelphia traditions: soft pretzels.

THE DECIBEL – As children return to class after the holidays, parents and teachers are in the spotlight on Thursday’s edition of The Globe and Mail podcast to find out how they are feeling. Plus, Dr. Janine McCready, infectious disease physician at Michael Garron Hospital in Toronto, talks about what’s known about Omicron and children so far, and the tools needed to reduce transmission in schools and in the wider community. The decibel is here.

Private meetings, Ottawa. The Prime Minister was also due to meet with Olusegun Obasanjo, the High Representative of the African Union Commission for the Horn of Africa.

No published schedule for party leaders.

The Globe and Mail Editorial Board on the question of whether non-vaxxers have to pay a special tax? : “On Tuesday, Quebec Premier Francois Legault announced a plan — okay, more of a half-baked idea — to tax the unvaccinated. There were no specifics, which is why it smacks more of public relations than public health. Tax The Unvaxxed looks like an attempt to divert public frustration from government to another target. That said, Mr. Legault picked a good target. The nine out of ten Canadians who are vaccinated have every reason to be furious with the one in ten who are not. They impose burdens on us. Hospitalization statistics – more on those in a moment – ​​are a reminder that individual choices, good and bad, have collective consequences.

Campbell Clark (The Globe and Mail) on how the health care accountability sleight of hand should end: “Following this week’s Premiers’ call, a spokesperson for Ontario Premier Doug Ford released a statement citing a ‘gap’ in federal funding of billions of dollars that could be used to improve health care – as if provincial authorities can’t improve the system until the feds cough up more dough. But of course they can. They can raise funds almost the same way as Ottawa, from the same taxpayer. And they can decide what should be funded and what should not. Only the provinces, not Ottawa, can make choices about how the health care system works, to make it more efficient or provide better care.

Konrad Yakabuski (The Globe and Mail) on French President Emmanuel Macron and Quebec Premier François Legault playing politics with the unvaccinated: “Emmanuel Macron and François Legault may share the same mother tongue, but they speak very different political languages. While one wields his words like an Olympic fencer thrusts his sword, the other seeks to address voters in distinctly everyday prose. One likes to flash his intellectual prowess, while the other emphasizes his common sense. Yet the French president and Quebec premier, both up for re-election in 2022, have adopted similar political strategies as they fend off criticism over their handling of the COVID-19 pandemic. Each has stooped to stigmatizing the unvaccinated as a diversionary tactic, despite the inherent danger of pitting an exasperated majority against a misunderstood minority.

Vaughn Palmer (The Vancouver Sun) on the BC Liberals getting the kind of coverage for their leadership race that no party wants: “The BC Liberals feared their leadership race would be ignored by the news media, but now find themselves getting the kind of publicity no political party wants. The provincial opposition party is facing calls to postpone next month’s leadership vote pending a full investigation into allegations of fraudulent memberships. At the same time, the party is accused of selecting members of the South Asian and Chinese communities for scrutiny and audit.

2022 Assembly elections: Twitter launches a series of campaigns for voters