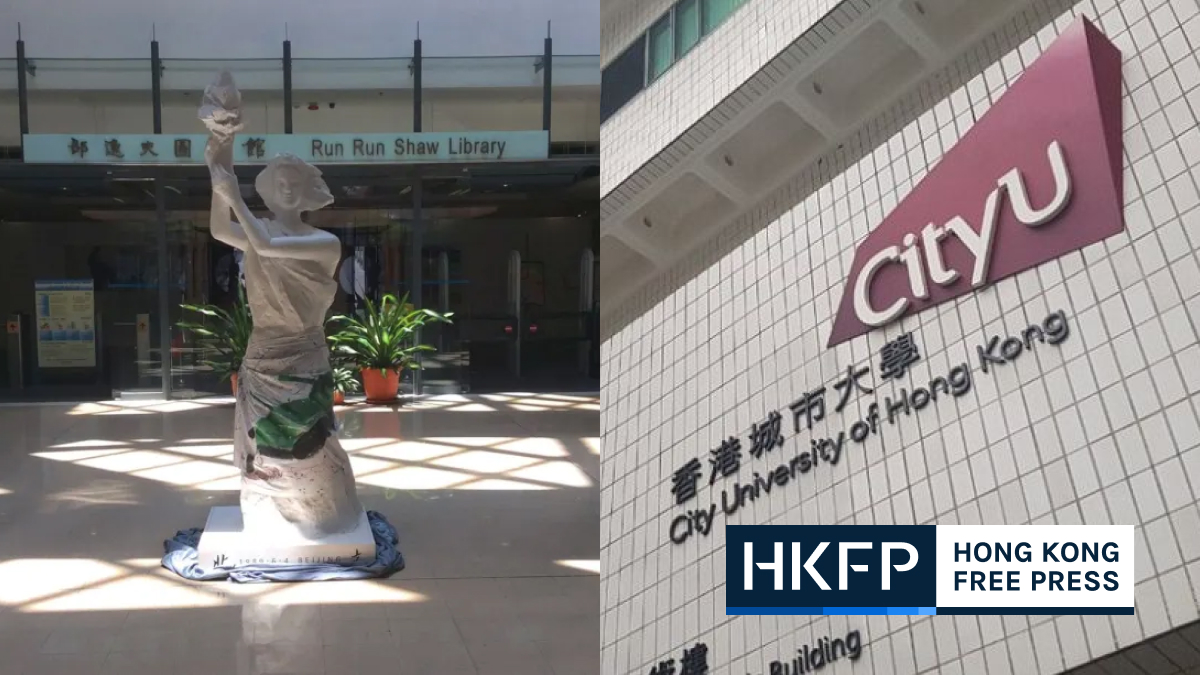 The City University of Hong Kong has ordered the statue of the Goddess of Democracy to be removed from campus, as it becomes the city’s fourth academic institution to crack down on monuments commemorating the Tiananmen Massacre in 1989.

In an email to the union on Friday, school officials said the “temporary posting of the article” had “expired” on March 31 of this year and that the group of students were to move it the same day.

The union told HKFP on Sunday night that it had not moved the statue, which still stands outside the Run Run Shaw library. A spokesperson added that student representatives will meet with the university next week to discuss the matter.

“We are already warning[ed] the university not to remove the statue without permission from the union, ”a spokesperson wrote.

The statue of the Goddess of Democracy was donated to the union in 2012 by the Former Hong Kong Alliance in support of China’s democratic patriotic movements. The pro-democracy group, which disbanded in September under pressure from the authorities, held annual vigils for the Tiananmen massacre in the city until last year, when police banned the rally due to Covid-19.

The statue stands next to a bulletin board known as the Democracy Wall. The board was barricaded by university officials last year, the union told HKFP, and has been empty since then.

In June 2020, Beijing inserted national security legislation directly into Hong Kong’s mini-constitution – bypassing the local legislature – after a year of pro-democracy protests and unrest. It criminalizes subversion, secession, collusion with foreign forces and terrorist acts, which have been broadly defined to include disruption of transport and other infrastructure. The move gave the police considerable new powers, alarming Democrats, civil society groups and business partners, as such laws have been widely used to silence and punish dissidents in China. However, authorities claim that this restored stability and peace to the city.

This isn’t the first time the university’s statue of the goddess of democracy has made headlines. In 2019, a month after the protests began, a man knocked over the sculpture and tore political posters from the Democracy Wall.

Local media said the man was a university graduate in mainland China. Photos showed the statue overturned on the ground, with parts broken off.

The man was arrested on suspicion of criminal damage. He pleaded guilty in court and was ordered to pay HK $ 15,000 in compensation, according to an article posted on the student union’s Facebook page last July.

The city’s university order of reference is part of a multi-day campus crackdown – which unfolds around Christmas as students and staff are away – targeting works of art that pay tribute in the 1989 massacre in Beijing.

In the early hours of Thursday, the University of Hong Kong dismantled the eight-meter-high Pillar of Shame sculpture after asking for its removal in October. University officials cited security concerns and referred to the “Hong Kong Colonial Government” Crimes Ordinance.

The move drew international condemnation, with Amnesty International calling the suppression “another attack on free speech in Hong Kong and a shameful attempt to erase history.” The government, meanwhile, declined to comment but told HKFP on Friday that “rights and freedoms are not absolute.”

The next day, the Chinese university removed its statue of the goddess of democracy without warning. Meanwhile, at Lingnan University, authorities removed a relief sculpture depicting scenes from the bloody massacre – including the iconic “Tank Man” image where an anonymous individual stood in front of a row of tanks.

“The student union expresses its deep regret for the university’s unilateral decision to remove the monument, without any communication with the students,” Eric Tong, a student official at Lingnan University, told HKFP on Friday.

The Tiananmen Massacre took place on June 4, 1989, ending months of student protests in China. It is estimated that hundreds if not thousands of people died when the People’s Liberation Army was deployed to suppress protesters in Beijing.

Until last year, when police banned the annual vigil for the Tiananmen massacre citing Covid-19, Hong Kong was one of the few places on Chinese soil where the incident could be openly commemorated. Any mention of the crackdown is censored on the continent.

sabha: Sahitya Sabha holds discussion on economy and role of women in society |…