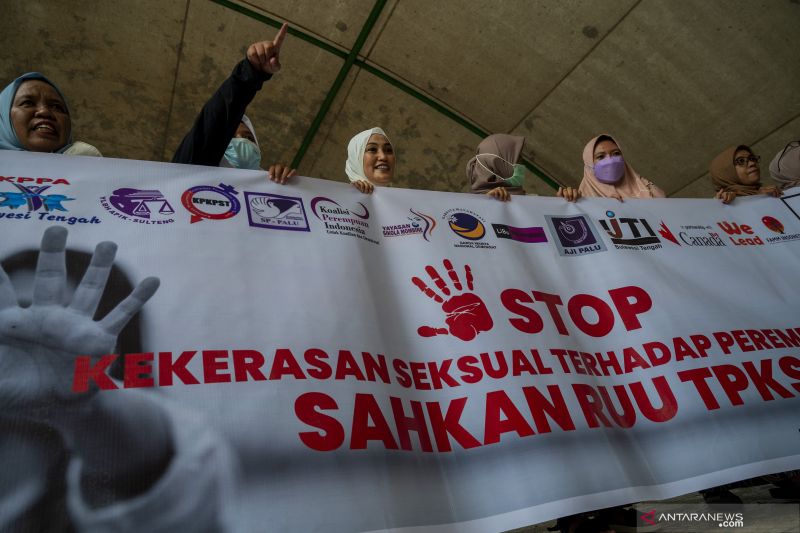 Jakarta (ANTARA) – On December 16, the Sexual Violence Prevention Bill (RUU TPKS) was not presented to the House of Representatives (DPR) plenary meeting of the second sitting period for 2021- 2022 ending to become the DPR’s own initiative bill.

This failure prolongs the wait for the ratification of the RUU TPKS which had been proposed since 2016.

According to RPD vice president Sufmi Dasco Ahmad, a technical problem was the reason why the bill was not presented to the plenary meeting.

The problem was that the time limit for the leaders’ meeting and the deliberation agency had passed.

The discussion for the TPKS RUU was not yet complete at Level I, thus leaving no time for it to be placed on the agenda of the management meeting and the deliberation agency.

While waiting for his return, what exactly is the context of cases of sexual violence in the country? Also, what makes the ratification of the bill urgent and why are some people opposed?

The prevalence of sexual violence in Indonesia is clear from the emergence of several cases.

COVID-19 is not the only scourge that exists, as sexual violence has become something of a pandemic, with no end in sight.

According to the 2021 annual record of the National Commission on Violence Against Women (Komnas Perempuan), 299,991 cases of violence against women were reported in 2020.

Cases of sexual violence dominated the data, with 45.6% of them occurring in the public space while 17.8% in the private domain.

Data from the Ministry of Women’s Empowerment and Child Welfare paint an equally grim picture.

Among these cases, sexual violence returned to being the most frequently suffered by children, at 45%.

In addition, a recent case of sexual violence has come to light in which a pesantren, a boarding school, the administrator had harassed and raped 11 of his students.

This presentation of the data makes it urgent to ratify the RUU TPKS in order to act as a legal umbrella to stop the pace of the pandemic of sexual violence.

Urgency to ratify the bill

Greater Indonesia Movement Party politician (Gerindra) Rahayu Saraswati Djojohadikusumo said it was important to immediately ensure that the bill became the DPR’s own initiative bill and ratified it in as law.

Several existing regulations have not yet specifically regulated issues regarding the prosecution of sexual violence cases that could bring justice and protection to victims, she noted.

The Criminal Code (KUHP), the Child Protection Law, the Electronic Information and Transaction Law (ITE) and even the Pornography Law could not provide legal protection to Indonesian citizens, who were victims of sexual violence.

A similar opinion was also expressed by lawyer Gugum Ridho Putra. More specifically, he referred to the lack of prosecution in cases of sexual violence within the KUHP.

The KUHP does not yet cover non-physical sexual violence, such as verbal crimes that attack the psyche of victims and intimidate them, he said.

In addition, the KUHP stipulations do not yet take into account the best interests of victims of sexual violence, which leads these cases to become an iceberg phenomenon.

This phenomenon means that the cases revealed are only a fraction of the actual number of cases, as several victims have remained mothers for various reasons.

For example, they were afraid that no one would believe their testimonies or they were ashamed of their experience, and they believed that the law within the nation did not support them.

In addition, the KUHP always follows the same legal process for cases of sexual violence, like other criminal cases which require two sufficient pieces of evidence.

This despite the fact that not all victims are able to present evidence.
Related news: Speeding up adoption of sexual violence bill: MPR vice-president

Opposition to the ratification of the bill

While there is a real urgency to ratify the RUU TPKS, the facts on the ground have led several parties to oppose its ratification.

According to Putra, one of the factors that led to the rejection of the bill is its title.

Several parties believe that the word â€œviolenceâ€ in the title can potentially lead to a new problem, notably the non-violence aspect which ends up not being stipulated in the regulations.

With this, any sexual crime without violence will not be penalized. To this end, these parties proposed changing the title of the bill to the Sex Crime Prevention Bill.

The next reason concerns the indication of sexual consent, which means that there was no prohibition of fornication and same-sex relationships, which indicates that such behavior is accepted in the bill.

In response, the head of the working committee on the Sexual Violence Prevention Bill, Willy Aditya, pointed out that the bill does not contain sexual consent.

The prospect that sexual consent is contained in the bill is the result of a misunderstanding between several parties, he explained.

Based on these reasons, it is understandable that there are rejections from the RUU TPKS which could in fact become a contribution to better regulation.
Related News: Sexual Violence Prevention Bill Will Guarantee Victims’ Rights: Ministry

Hope for the bill in the future

The various problems and oppositions do not mean that the RUU TPKS has no hope of being ratified. Despite divergent perspectives, there is always an opportunity to find a way out.

To that end, the hope that the bill will become the then-ratified DPR’s own initiative bill still exists.

DPR’s hard work in meeting the legal needs of the people, especially strict legal protection to protect people from cases of sexual harassment, must always be commended, Putra said.

If there is an urgent need to ratify the bill, the wording of the regulations must be done with precision to avoid the presence of ambiguous articles, he noted.

The existence of these ambiguous articles could potentially allow them to be exploited by morally corrupt parties and become a gateway to a host of other legal issues.

Based on these factors, it can be concluded that the follow-up and encouragement of the ratification of the bill to become a legal shield against all kinds of sexual violence is inevitable.

In addition, it is equally important to understand that the long wait for the bill to be ratified due to the various perspectives that exist should be positively channeled into hope and optimism.