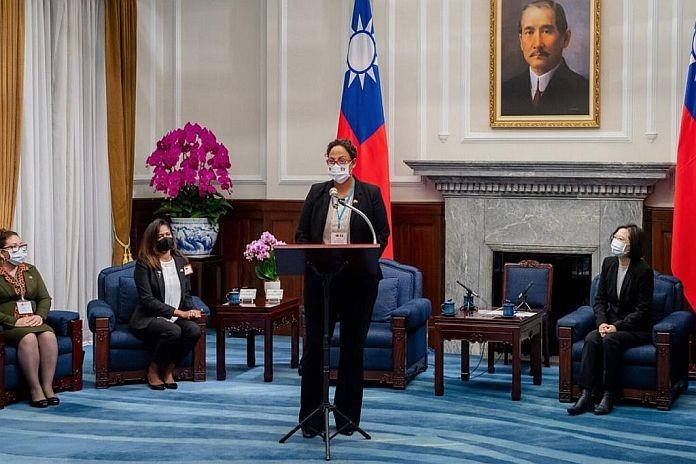 Open Parliament in a Post-COVID Context: Global Examples of …

This forum is held under the theme Open Parliament in a Post-Covid Context: Global Examples of Resilience and Planning for 2022 and Beyond. This follows Taiwan’s first statement earlier this year of its 2021-2024 Open Parliament Action Plan.

I especially want to express my gratitude, on behalf of the Parliament of Belize, to President Tsai Ing-Wen who is not only the first female president to be elected in the Republic of China (Taiwan) but who has been elected twice! Her handling of the Covid-19 pandemic is an outstanding example of transformative leadership by women. It earned him worldwide recognition with the recent declaration of support from the Group of Seven to the “Taiwan can help” campaign to share their scientific and technical expertise and with their call for Taiwan’s inclusion in the World Health Assembly. So, I echo the sentiments “no one is safe from the COVID 19 pandemic until everyone is safe” and Taiwan has a lot to teach and share with the world.

The theme of this year’s Open Parliament forum is about resilience, so I hope I don’t embarrass my friend President Tsai Ing-wen when I say that Taiwan under her leadership is actually a global example of resilience. There is no better demonstration of a country’s resilience to threats of authoritarianism in the region than that of Taiwan against a superpower. I endorse Foreign Affairs magazine’s statement that Taiwan’s success is a testament to what “a determined practitioner of democracy, characterized by good governance and transparency, can accomplish.”

Ladies and gentlemen, let it be known: Taiwan is an important development partner for Latin America and the Caribbean. This year marks a 32-year history of bilateral relations with Belize and Taiwan and with it a lasting bond of friendship and respect.

Taiwan is one of Belize’s major partners in disaster risk management, aquaculture, agriculture, trade and investment, health, education and development sustainable. And on responsible and sustainable development, we commend the government of Taiwan for its announcement last month of its commitment to “incorporate the 2050 net zero emissions target into national legislation.” As one of the small developing states in the Wider Caribbean region that is on the front lines of the climate crisis, we welcome this news because it is the kind of commitment, adaptation and collaboration needed from on the part of world leaders to keep 1.5 alive and stem the tide of climate change.

The people of Taiwan and Belize share the values ​​and principles of freedom, democracy, peace, respect for human rights and the rule of law. Therefore, when I became Speaker of the Belize House of Representatives in December of last year, I was pleased that our parliament engaged in the interparliamentary platforms of the Formosa clubs established in Latin America and in the Caribbean. We appreciate Taiwan’s contributions to the international community to advance democratic governance. It is for this reason that it is a great honor for me to be here to deliver these remarks at the opening of this year’s forum to fully support Taiwan’s leadership in promoting legislative openness and creation. spaces for discussion on the open government partnership process outlined in its action plan.

This gathering of democratic allies, governments, parliaments and civil society organizations to exchange views on how to improve openness, its challenges and its practical applications for the people we serve is a another example of Taiwan’s world leadership in its tireless quest for democracy.

It’s no wonder then that Taiwan was invited by the United States to be one of 110 countries to participate in the first Democracy Summit hosted by President Biden. This reaffirms Taiwan’s contribution to the international community and is a strong recognition of Taiwan’s efforts to strengthen the ideals of democracy. As President Biden said at the start of his administration ” Democracy does not happen by chance. We must defend it, fight for it, strengthen it and renew it ”. Taiwan has proven to be a stubborn and determined practitioner of this, and this 2-day forum signifies the Legislative Yuan’s relentless work in its commitment to its key role in overseeing democracy.

With its Action Plan for an Open Parliament, Taiwan shared the process it has embarked on, the lessons learned and the knowledge gained. That is why, President You, your words ” We will walk together on this path of democracy Resonates and captures perfectly the critical need for broad public opinion, bipartisan support and the sharing of experiences of other parliaments, governments and civil society organizations. We can learn a lot from each other when we work together.

Today, our parliamentary institutions are radically different: Taiwan’s Legislative Yuan is a 113-seat unicameral chamber and the Belize National Assembly – bicameral with a 31-seat House of Representatives and a 13-seat Senate.

Despite these differences in size, structure and systems, our aspirations for improved democratic governance, legislative openness and increased public engagement are aligned. The government of Belize, in its Plan Belize program under the administration of Prime Minister John Briceno, pledged its commitment to good governance and an improved parliamentary system for Belize. I recognize that this is a difficult process and task for a small country with limited resources, but as Speaker of the Belize House of Representatives, I am determined to ensure that our institution goes in that direction. I look forward to the round tables because we can learn a lot from your experience.

With this two-day forum, Taiwan continues to demonstrate that your country is not only one of the world leaders in health, political liberalization and information technology, but also in democratic governance. That is why Belize will continue to advocate for Taiwan’s participation in international and intergovernmental groups, including, but not limited to, organs of the United Nations system such as the United Nations General Assembly (UNGA ), the World Health Assembly, the International Civil Aviation Organization (ICAO), and the United Nations Framework Convention on Climate Change (UNFCCC).

Belize, like Taiwan, will have to rise to the challenge and demands of its people for more openness from our parliament if we are to meaningfully join this global effort. We have taken positive first steps with the live streaming of the House and Senate meetings with the help of the Government of Taiwan. It started with the previous legislature. While not a parliamentary television system, it certainly provided better access to the general public to our House and Senate meetings. Yet, in its early days, Belize also established the Joint Public Accounts Committee which was introduced by our new parliament earlier this year.

This committee is chaired by a member of the opposition and includes a majority of non-government members. The Belize National Assembly also has a website that provides basic information on bills and motions before parliament. We are currently working on a code of conduct for our parliamentarians, amending our Rules of the House and Senate and examining how we can improve our engagement with the public. This is a direct result of the benchmarks recommended for democratic legislatures.

Despite these initial steps, a significant effort and push is needed to embrace the ethics of an open parliament for the modern era and the lessons and exchanges over the next two days should prove very helpful in this regard. Like Taiwan, we recognize the need to bring a digital transformation to our parliamentary institution and an improved online system for public accessibility that rightly demands a higher standard from our parliaments. Let us not forget that parliamentarians are elected to serve the people and that decisions made in parliament ultimately have an impact on their lives.

Transparency and openness in the work of parliamentary committees and a change in the organizational culture and administration of parliament are just some of the other steps that we will also need to take if we are to build a stronger institution. Doing this, as evidenced by the actions set out in Taiwan’s Open Parliament Action Plan, will better serve the people and embrace the essential pillars of transparency, accountability, public engagement, inclusion. and education.

To this end, we are grateful for the bilateral relations and cooperation with Taiwan. This can help us now to also adopt a strong open parliament process. We can build on the experiences Taiwan has had in working across party lines for full support in this journey towards a more open parliament and best practices in working with civil society organizations for public engagement. increased.

In conclusion, I am happy to convey the best wishes of Prime Minister John Briceno and his cabinet, the National Assembly of Belize and our nation for the lasting good bilateral relations, cooperation and friendship between our two countries. Best wishes for a productive forum over the next two days and on the further implementation of Taiwan’s Open Parliament Action Plan, another concrete example of Taiwan’s democratic governance. Xie-xie.

Legal warning: MENAFN provides the information “as is” without warranty of any kind. We do not accept any responsibility for the accuracy, content, images, videos, licenses, completeness, legality or reliability of the information contained in this article. If you have any complaints or copyright issues related to this item, please contact the supplier above.

Announcing the winners of the first annual SCHEELS $ 40,000 donation campaign in Colorado Springs

From Medicine, the Army and Mediation to the Mughal Court – The New Indian…