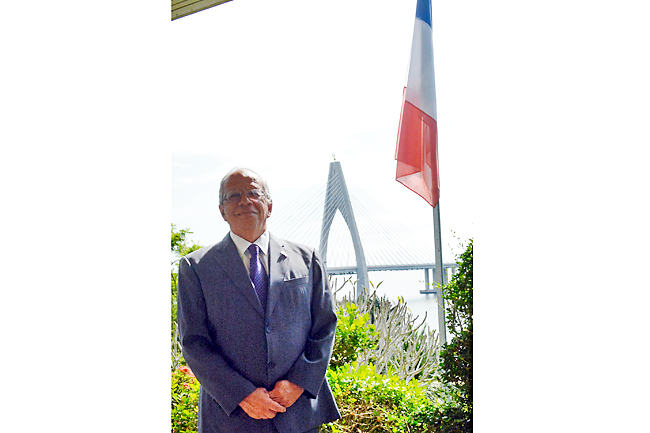 Outgoing French Ambassador to Brunei Darussalam Christian Ramage is due to leave the Sultanate today, taking with him a suitcase of fond memories after a successful four-year tenure promoting bilateral and diplomatic relations between the two countries.

Ramage said: “France and Brunei Darussalam have enjoyed good relations since the start of diplomatic relations in 1984. We opened our embassy here at the end of 1984.”

He pointed out that 100 French citizens live in the Sultanate.

While here, Ramage has become a keen tai chi practitioner and hiker, falling in love with the country’s natural environment.

â€œI would hike at least three times a week, especially enjoying the Belambang Trail. Few countries have so many hiking areas. I congratulate Brunei for preserving its virgin forest. Flying over the island of Borneo, I can see the difference between the Sultanate and Malaysia, in terms of green densityâ€¦ it’s very different, â€he said.

Regarding the promotion of sport, Ramage said: â€œI was very happy to be able to organize pÃ©tanque tournaments before the pandemic this year. PÃ©tanque is a French sport invented at the beginning of the 20e Century. The sport is very popular in France and in the countries of Indochina. I was delighted to see it featured in the SEA Games.

He also expressed his gratitude to the French Bruneian Business Association for its activity and the annual organization of business discussions with ministers and eminent experts.

â€œBrunei Darussalam is an important partner of France because we are the third diplomatic network in the world in terms of embassy and consulate, after the United States (US) and China. We have embassies everywhere and in all ASEAN member countries.

â€œThe Sultanate also belongs to the Indo-Pacific zone, which is a priority for us. France is part of this zone, with territories in New Caledonia, French Polynesia. We have about two million people living in the Indo-Pacific area. We have the second largest maritime domain after the United States, at 11 million square kilometers. To protect our sovereign, we have military means such as warships, planes and soldiers. We are the only member of the European Union (EU) to be present in the Indo-Pacific area, so we have a special role in the region, â€he said.

â€œThere is a strong French presence in the Indo-Pacific. Our government is committed to freedom of navigation within the international laws of the sea, including the South China Sea, â€Ramage said.

â€œWe have a TotalEnergies operation here. We also have strong relationships with the defense sector, where missiles, armored vehicles and airport radars originate in France. The newest aircraft of the Royal Brunei Air Force was built in France. In addition, we have several French brands here. We are therefore committed to staying because Brunei is an important country for France, in ASEAN, â€said Ramage.

France will preside over the EU for six months from January 2022, the Indo-Pacific zone being one of the priorities. A conference in Paris on February 27 will bring together officials from EU countries and Asia. Brunei Darussalam will also be invited, he said.

The outgoing ambassador ends his diplomatic career with the post in Brunei, describing it as a “real privilege” to have served in the Sultanate.

“It was easy to meet His Majesty and His Royal Highness Prince Haji Al-Muhtadee Billah ibni His Majesty Sultan Haji Hassanal Bolkiah Mu’izzaddin Waddaulah, the Crown Prince and Chief Minister of the Prime Minister’s Office, at official events “Ramage said.

Welcoming the Brunei government’s fight against the COVID-19 pandemic last year, he said: â€œGoing 15 months without a COVID-19 case is an achievement.

â€œDespite registering a high number of cases after the second wave, it is still not as serious as in other parts of the world, such as in Europe. In terms of the death toll comparison, Brunei has done well. I am quite optimistic that the Sultanate will overcome the second wave with its high vaccination rate. I think over 80% of the population will be fully vaccinated by the end of the year. In France, 88% of the population is fully vaccinated.

“Even with the high vaccination rate, it is important to maintain standard operating procedures (SOP), including social distancing, wearing a face mask and using the BruHealth app,” he said. he declares.

After Brunei Darussalam, Ramage will work at the French Ministry for Europe and Foreign Affairs, before becoming a lecturer at a university in France.

The new French Ambassador to Brunei Darussalam Bernard Regnauld-Fabre will arrive on November 7.