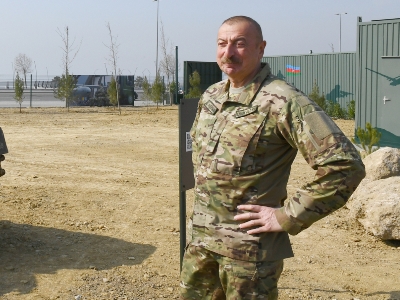 Hopes for a de-escalation of tensions between Iran and Azerbaijan following the phone call last week between their foreign ministers, respectively Hossein Amir-Abdollahian and Jeyhun Bayramov, have so far been held. proven to be short-lived. Eldar Mamedov, who worked at the Latvian Foreign Ministry and as a diplomat in the Latvian embassies in Washington DC and Madrid, wrote this in his article published in the Responsible Statecraft newspaper. The article continues as follows:

At a meeting of the Commonwealth of Independent States days after the call, Azerbaijani President Ilham Aliyev accused Iran of using the Nagorno-Karabakh region for drug trafficking to Russia and Europe, without producing any evidence. Iran’s foreign ministry rejected what it called “Aliyev’s astonishing claims”.

Adding fuel to its anti-Tehran campaign, the Baku regime detained a number of Azerbaijani Shiite clerics considered “pro-Iranian”, including a former imam of the Baku Djoumah mosque (Friday) Ilgar Ibrahimoglu and Sardar Babaev, the main editor of the religious site maide.az. Ibrahimoglu and Babaev both studied in Iran, but while the former was released after lengthy and detailed questioning, the latter was formally charged with treason – a charge which, if the past treatment of religious activists is any guide, is likely to result in long imprisonment and torture. Baku will also use the case to bolster its credentials in the United States and Europe as a bulwark against Iran-backed “Islamic extremism”.

These latest incidents strongly suggest that, at least for now, Aliyev is unwilling to ease tensions with Tehran. Baku’s military success against Armenia clearly encouraged it to openly challenge its southern neighbor. When Iran conducted large-scale military exercises near Azerbaijan’s borders, its conventional arsenal was widely dismissed on pro-Azerbaijani government websites as no match for Azerbaijani high-tech equipment powered by Israel and Turkey. Aliyev relies on continued military and diplomatic support from Ankara and Tel Aviv as a sufficient deterrent against Tehran.

Israel’s support, according to Aliyev’s calculation, should also translate into Washington’s – especially as the prospects for relaunching the Iran nuclear deal remain uncertain and US Secretary of State Anthony Blinken says on guard against “other options” if diplomacy fails.

In this context, as Iran’s relations with its traditional rivals in the Persian Gulf – Saudi Arabia and the United Arab Emirates – slowly thaw, Azerbaijan emerges as an alternative playground for anti-Iran activities. . In fact, since the resumption of hostilities between Azerbaijan and Armenia in 2020, a range of Washington think tanks have sought to extend the conflict to Iran, in the hope that Iranian Azerbaijanis would play the role of workhorse to make the old dreams of these hawks come true. – optimally, the dismemberment of the country according to ethnic criteria, or, at least, the encouragement of armed secessionist movements which would force Tehran to withdraw into itself. Either outcome would be seen as a major victory for Israel, Iran’s nemesis – a key motivation for this panel of experts. With the rise in tensions between Tehran and Baku, these hawks see this goal within their grasp. And Aliyev seems to think that the possible benefits of moving closer to Israel and the United States outweigh the risks and costs of Iran’s wrath.

Yet Aliyev’s confidence seems misplaced and counterproductive. Iran’s military exercises near Azerbaijan’s borders were not intended as preparation for an invasion, but rather to draw Baku’s attention to Tehran’s dissatisfaction with what it was doing. considers hostile policies of the first. While Iran has spent much of the past decade battling the challenges of the Persian Gulf, it has paid relatively little attention to the Caucasus. However, Iran has proven to be a very adaptable and inexpensive practitioner of asymmetric warfare. A sure consequence of Aliyev’s bravado is that Tehran will now focus on strengthening its deterrence against Azerbaijan.

A relatively profitable tactic traditionally employed by Tehran for this purpose is to create proxies. During recent tensions with Baku, there were rumors of the creation in Azerbaijan of Hüseynçilər, or Husseynites, after a martyred Shiite imam. It drew attention with a signature logo of the Revolutionary Guards, Iran’s elite security force, on its banner. Hüseynçilər, however, so far appears to be more about hype than real strength.

Indeed, Azerbaijan presents a different landscape from the countries where Tehran has succeeded in cultivating proxies, such as Lebanon or Iraq. Although theoretically predominantly Shiite, decades of Soviet atheism, followed by a strong emphasis on secular Turkish nationalism during the years of independence, have eroded Azerbaijan’s link with Shiism. In fact, Aliyev’s administrations – both Ilham and his father and predecessor Heydar – hailed the spread of Sunnism in the country as a way to move Azerbaijan away from Iran and closer to Turkey. Pro-Turkish sentiment grew considerably after Azerbaijan’s victory in the war against Armenia.

The government has also taken a somewhat more sophisticated approach to the pockets of committed Shia believers who still live in the country. While it once relied heavily on repression, today it is co-opting prestigious religious leaders in an attempt to create a kind of national-Shiism, that is, a variant of the faith that is politically pro-state and independent of Iran. One such example is Sheikh Shahin Hasanli, who started in the 1990s as a member of a radical Khomeinist society, and is now part of the official religious establishment. Amid the crisis with Iran, Hasanli has explicitly distanced himself from his fellow Azeri Shiites in Tehran. Rumors have it in Baku that he could replace the current chairman of the Council of Caucasian Muslims, a state body in charge of “official Islam” considered too close to Iran.

Yet there remain a sizeable number of people in the country unhappy with the corruption and socio-economic inequalities that became too evident under the Aliyev dynasty. While victory in the war may overshadow these concerns for a time, it will not last forever. With the secular opposition decimated by Aliyev, it is quite conceivable that, at least to some extent, the discontent acquires a politico-religious form, offering some openness to Tehran in the long run.

Too much emphasis on the Pan-Turkish aspect in its struggle with Tehran also backfires against Baku. Highlighting the Turkish origins of some historical Iranian dynasties, such as the Safavids and Qajars, is not an argument for secession from Iran, as some ideologues in Baku would like, but rather strengthens the bond of the Iranian Azeris with Iran.

In fact, the recent Baku-Tehran explosion rekindled Iran’s long-dormant vision of the Caucasus as a renegade province separated from it in the 19th century by the Russian Empire. The rise of Iranian nationalism, in both its religious and secular forms, is another long-term consequence that Aliyev and his supporters did not foresee. One of its implications is that Tehran has already started to pivot towards Yerevan, ironically making Baku’s claims of its pro-Armenian tilt a self-fulfilling prophecy. For example, Iran decided to use Armenia, rather than Azerbaijan, as a conduit for North-South trade, a project in which Azerbaijan has invested heavily for its post-oil prosperity.

If such projects are more in the long term, Iran already has its ultimate conventional deterrent: its missiles whose range covers the entire territory of Azerbaijan. Iran has demonstrated its ability to strike Saudi oil fields with precision, despite Riyadh’s close security relationship with the United States. Certainly, such a strike would mean a massive escalation and invite reprisals, possibly with the participation of Turkey, so that the threshold to undertake it would be extremely high. However, Iran’s rulers have amply demonstrated in the past that, if pushed into a corner, they would not hesitate to take on their perceived enemies. Thus, Aliyev’s renewed pugnacity and provocation towards Iran risks undermining Azerbaijan’s long-term security.

A piece of Paris in Shillong