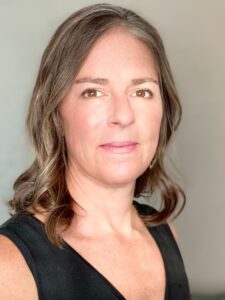 “Cari is tenacious in his pursuit of innovation in sedimentary geology,” wrote Lauren Birgenheier, professor of geology and geophysics, in Johnson’s quote. “His work on sedimentary geology and its applications to tectonics is grounded in fundamental field-based science and has an advanced understanding of the complexities and architecture of non-marine, tidal, and shallow marine deposit systems.”

The quote also mentions Johnson’s unwavering commitments in her roles as a mother, teacher, mentor, researcher and friend, “always pursued with vulnerable excellence that inspires more.”

Johnson studies the recording of sedimentary rocks to reconstruct distant landscapes and understand the geological processes that have controlled their evolution, such as climate and tectonics.

Dickinson, the namesake of the medal, advised Johnson’s doctoral director and influenced her through her approach to big-picture thinking and data collection in the field. Students today face daunting challenges, she said in her response to the quote, including challenges of diversity, equity and inclusion, public perceptions and the politics of science, as well as a global pandemic and climate crisis.

“We owe it to our students, not to mention the planet, to provide the best preparation possible,” she said. “And I don’t have the answers, but I think the solutions have yet to be based at least in part on the fundamental principles championed by Bill Dickinson: observational skills, multidisciplinary toolkits, creative and critical thinking and the ability to communicate our science to a full range of stakeholders.

Paul Brooks, professor and hydrologist, joins the 2021 class of Fellows from the American Geophysical Union. He is one of the 59 Fellows announced this year. According to AGU, the fellows “have made outstanding achievements and contributions in pushing the boundaries of our science. They also embodied AGU’s shared vision of a prosperous, sustainable and equitable future for all, fueled by discovery, innovation and action. Equally important is that they have behaved with integrity, respect, diversity and collaboration while creating a deep commitment to education and awareness.

The Brooks Prize is awarded to “fundamental advances in the dynamics of snowmelt and the understanding of hydrological and biogeochemical processes at the watershed scale.” He studies how climate interacts with the earth’s environment (the earth’s surface where rock, water, life, atmosphere and the built environment interact) to control climate feedbacks and habitability. Much of his current work focuses on snow accumulation, snowmelt, and water availability in mountain environments.

Brooks’ research group is working with colleagues in atmospheric sciences, engineering and regional water managers to translate this basic research into tools for managing water supplies in the face of climate change and growth. populations in the west.

“Being named a Fellow is an honor and in large part reflects the excellent mentors I have had and the fantastic students, postdocs and colleagues I have been able to work with,” said Brooks.

Erich Petersen, professor emeritus and economic geologist, is the 2021 recipient of the Ralph W. Marsden Award of the Society of Economic Geologists (SEG). The award honors outstanding service to the Society and “outstanding stewardship and contributions to the affairs of the Society”.

In the late 1980s, Petersen and William X. Chavez du New Mexico Institute for Mining and Technology established one of the first student chapters of SEG and began leading international courses in the field. When SEG launched the Student International Field Trip Program, Petersen and Chavez led 13 of the first 14 trips.

“Graduate and undergraduate students from over 49 countries and 56 universities representing 10 language groups and over 8 ethnicities participated,” says Petersen, “as well as over 100 mentors, including junior and senior mining geologists. and exploration, scientists from the National Geological Survey, managers, CEOs, historians, lawyers, economists, university professors, and even seven presidents of SEG! The impact on the participating students, he says, has been transformative.

He has personally known 11 Marsden Award recipients and has long been an active participant in SEG, even helping to create the Society’s first website.

“I suggest that Erich’s service to society, and indeed to economic geologists around the world, has been exemplary and demonstrates a long-standing dedication to excellence in education, research and service to students. and fellow economic geology professionals, ”Chavez said in the award citation. . “Many of the field courses and workshops related to the student and SEG chapters that he has organized reflect the emphasis on distributing his personal wealth of knowledge and experience. “