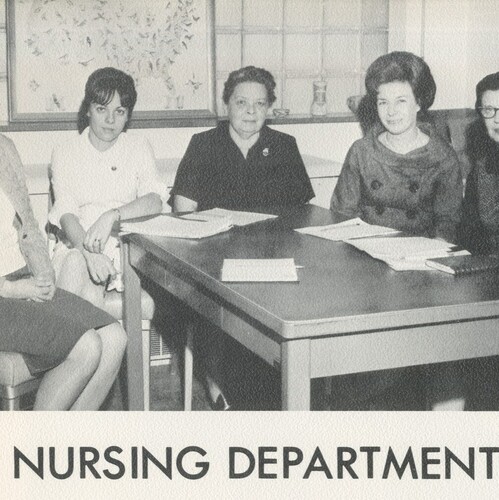 Over half a century ago, residents of southwest Connecticut interested in becoming nurses were trained at the Danbury Hospital School of Nursing. In 1965, when the hospital closed its nursing education program, its board of directors recommended that Western Connecticut State College fill the void by using the hospital’s clinical facilities to create a college program.

In 1964, the former Danbury High School house on White Street was purchased by the state and renamed White Hall in honor of Alexander White, a native of Danbury. It would serve as the initial and continuing home for our nursing program, which in 1965 became the second tax-funded institution in Connecticut to offer a bachelor’s degree in nursing program.

The first class of nurses began in September 1966 and graduated in 1970 with eight students. This 50 + 1 year milestone will be celebrated during WCSU Reunion Weekend with events on Friday October 8 and Saturday October 9, sponsored by the Department of Nursing and the Nursing Alumni Society. The Midtown campus will be the site of Friday’s celebration, with tours of nursing laboratories, networking opportunities and a presentation on â€œInnovations in Nursingâ€. Friday’s events are open to WCSU nursing students, alumni, faculty, friends and family. Saturday will include breakfast and tours of the Westside campus, public meetings and the Homecoming football game. For more information or to register, click here or contact Dr. Monica Sousa at This email address is being protected from spambots. You need JavaScript enabled to view it. .

Much has changed in the way nurses are trained and their role in health care in the 51 years since our first promotion.

A 2019 Business Insider article titled “OUT AND NOW: This is how the nursing profession has changed over the past 50 years,” notes that “Fifty years ago, physicians still treated nurses as assistants, and the role was seen as an extension of caring for women rather than a career. The role required less formal education, and nurses had only a “rudimentary” understanding of scientific medical care, according to Minority Nurse. Today, nursing is the largest healthcare workforce and continues to grow as America’s baby boomer population ages. Nurses can earn a variety of higher education certifications and diplomas and can be highly specialized in new areas such as forensic nursing and computer science. Now they are on the front lines of the global coronavirus pandemic, risking their lives to help others in urgent medical need. “

As proof of those ideas, here are some milestones from the past 51 years of nursing at WCSU:

The first director of nursing education in the mid-1960s was Associate Professor Eleanor King, who came from Yale University School of Nursing. Initially, two faculty members, Agnes Brown and Anna Ostopchuk, were hired to teach the first nursing courses. In 1968 Helen Mizer and Elizabeth Olsen were hired to teach maternal and child nursing and medico-surgical nursing, respectively. Additional faculty have been hired to teach senior nursing students.

Professor King left WCSU in the early 1970s and Dr Ruth Kohl became the new head of the department. She had been principal of the Danbury Hospital School of Nursing before leaving for her doctorate at the University of Connecticut, and was instrumental in the development of the RN-BS graduation program.

In 1984, Dr Kohl retired and Dr Andrea O’Connor assumed the post of Director. Under his leadership, the nursing department offered a master’s degree in nursing with a clinical nurse specialist, educational and administrative streams.

WCSU was the first school in the United States to install an IBM Advanced Technology classroom in the Westside Classroom Building in 1988, which became widely used by the school’s education and nursing departments. In the same year, the nursing department received its charter from the International Honor Society of Nursing-Sigma Theta Tau. Mary Ann Riley and Helen Mizer co-founded the Kappa Alpha Chapter.

In 1993, Dr Barbara Piscopo was elected chair of the department. Under his leadership, the MSc program was revised and a nurse practitioner track was put in place in consultation with Dr Laurel Halloran and Dr Andrea O’Connor.

In 2000, the Department of Nursing expanded the RN-BS program to include courses at the WCSU Waterbury site, located on the campus of Naugatuck Valley Community College. A year later, Dr. Stephanie Golub was elected chair of the department. In 2003, Dr Piscopo returned to the post of chairman of the department, and the nursing offices and the nursing lab at White Hall were redeveloped.

Dr. Karen Crouse was Department Director from 2007 to 2011, followed by Dr. Catherine Rice from 2011 to 2013. Ed.D. program began under Rice’s leadership. In 2012, in a joint program, WCSU and Southern Connecticut State University admitted the first class to the Doctor of Nursing program.

Dr Joan Palladino served as Department Director from 2013 to 2019. During her tenure as Chair, there has been a significant expansion and update of Laboratories, including Skills, Fundamentals, and Sim Laboratories. The number of students accepted has also increased. In 2016, a new physical assessment lab and classroom opened in the basement of White Hall. In 2017, four new state-of-the-art simulation labs were opened, which included three new SimMan patient simulators; two SimMan Essentials; a SimMom and a baby; and Harvey, a cardiopulmonary patient simulator. In 2019, SimJunior and SimBaby joined the simulation family.

Dr. Jeanette Lupinacci assumed the role of department chair in 2019 and has been a leader since, providing advice and working with state agencies and clinics during COVID-19. This has enabled nursing students to deliver vaccines to community clinics, allowing them to play a tangible role in the region’s COVID-19 mitigation efforts.

In 2020, all of the Nursing Department offices and skills labs moved to the newly renovated second floor of White Hall. The classroom and the core skills lab were also opened. The State Board of Nursing inspected the new labs and offices in the fall of 2021.

The Doctoral Program in Nursing Practice (DNP) will be launched in the fall of 2022. It is a post-master’s program with tracks in mental health and acute care, nurse practitioner in adult gerontology and clinical nurse specialist. .

What does the WCSU Nursing Department look like today? It is a long road traveled by the two professors and the eight students of the first class 51 years ago:

It also has one of the most successful NCLEX pass rates in the state.

Shelton and Stillman team up for student success