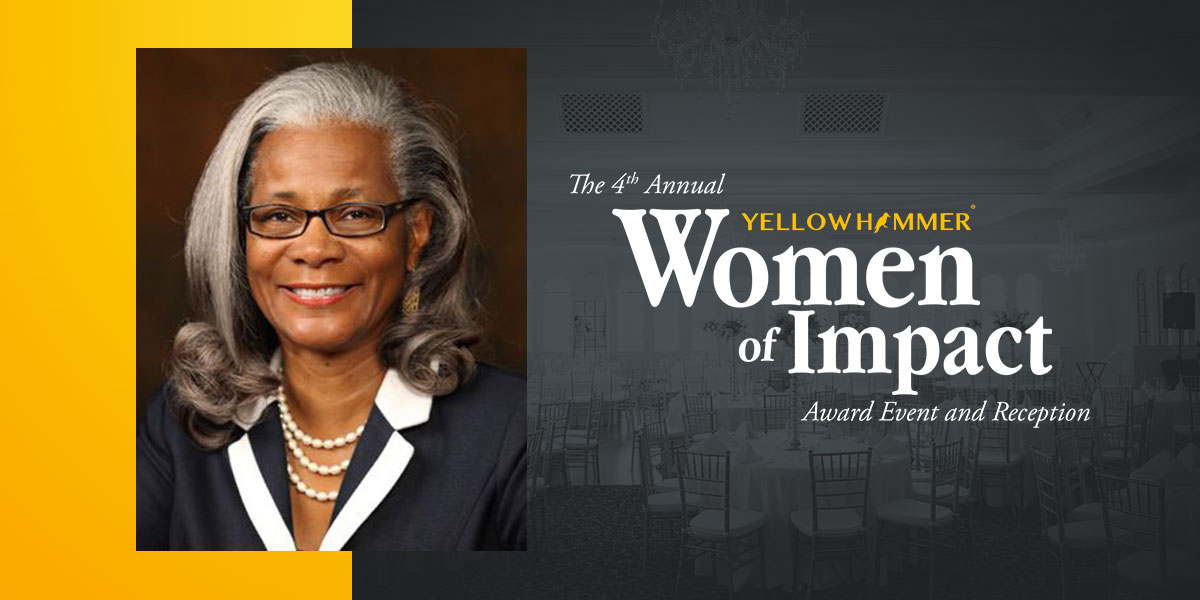 Merceria Ludgood is a Woman of Impact 2021

The story of Merceria Ludgood’s impact on her community and condition is one of a journey, in the truest sense of the word.

As an accomplished lawyer and current chair of the Mobile County Commission, Ludgood has built a catalog of personal experiences and knowledge that uniquely prepared her for service.

Originally from Mobile, she began the first leg of her journey at the University of Alabama, where she obtained her undergraduate degree and a Master of Arts degree.

Her interest in law was sparked by things she observed during the civil rights movement of the 1960s.

“I understood my status as Black in America and the legal battles that were being fought to dismantle segregation,” she noted. “The people on the front lines of these battles were lawyers. As a fifth grader, I didn’t know any lawyers, but there were men and women who looked like me doing this job, and I wanted to be a part of it.

While in the nation’s capital, she worked as a law clerk on the US Senate Judiciary Committee’s subcommittee on jurisprudence and government relations, chaired at the time by Senator Howell Heflin of Alabama.

With a law degree in hand and after being exposed to the fundamentals of public service, Ludgood returned to her hometown to continue her journey.

Ludgood engaged in a law firm and as an independent lawyer for several years until she was hired to lead the Legal Services Corporation of Alabama, which provides free civil legal services to eligible clients of the returned. She oversaw the group’s active practice in 60 counties in Alabama.

Four years later, she returned to Washington, DC to take on the position of Director of the Office of Program Services at the National Office of the Legal Services Corporation.

These opportunities had a lasting effect on Ludgood’s perspective on the law.

“My legal background has provided me with a variety of perspectives to see how our legal system works,” she explained. “Despite protests to the contrary, justice is not color blind. Unfortunately, in many contexts race matters. Economic status sometimes affects results as well. I have worked in environments where the motive was profit and in environments where it was not a consideration. “

It has also helped her become aware of the situations that she finds most rewarding.

“I was most satisfied with a firm where I felt free to do whatever was necessary, where I represented entities and / or individuals whose objective was not to win but to do the right things. things, ”Ludgood explained. “Despite what I have observed, I remain hopeful that the reality of our legal system will one day match its aspirations.”

As it turned out, Ludgood had traveled to Washington, DC on a round-trip ticket, and his next career stop was a full-time position as deputy county attorney and then deputy city attorney.

Ludgood was elected to the Mobile County Commission in 2007.

During his tenure, the Mobile region became a model economy for other cities and counties on the Gulf Coast.

“I am particularly proud of our efforts to establish regional cooperation in the areas of economic and workforce development,” said Ludgood. “Together with our private sector partners, we are making significant investments in our environmental resources and increasing public access to these resources. As our county becomes more diverse, we are building on our cultural assets and using them as a springboard to teach new generations about Mobile County’s rich history and unique ecosystems.

Ludgood’s contributions to his state have not been lacking in recognition.

She was selected to participate in Leadership Mobile, Leadership Alabama and the prestigious Kellogg National Leadership Fellowship.

As a member of the Alabama Workforce Development Board, she participates in the efforts of the State of Yellowhammer to modernize and expand its workforce.

His Kellogg scholarship involved traveling to 17 countries on five continents. During these trips, she interviewed women leaders and refined her take on some of the universal experiences women face.

“I’ve learned that generally women want the same things no matter where they live in the world,” Ludgood said. “They want their children to grow up in a safe place with decent housing, clean water, adequate food, access to health care and the ability to dream of a better life.

She continued, “I have learned that kindness is also a universal language, and that laughter and compassion transcend cultural and geographic boundaries. If we take time together, we will learn that in our common humanity we are more alike than we are different.

Given the wide range of experiences she has had in her community, in her state, across the country and around the world, it is no surprise that Ludgood has some sound advice to share with other women. starting their own journey – whether in law or in public service.

“Understand that the law and the public service are more than careers, they are ways of life,” she said. “Neither one fits into an orderly work schedule; they bleed into all aspects of your life. It can be managed, you just need to be aware.

She continued, “Always stay in touch with the communities you serve. Circumstances can pull you apart, but be intentional in having relationships that keep you rooted from a real work perspective. Make sure you have a diverse network of friends and colleagues and avoid “echo chambers”. Keep people around you who will lovingly challenge you to be your best and most thoughtful. Be clear with yourself about what motivates you. Ultimately, the degree to which you achieve personal congruence will be the ultimate test of the quality of your life. “

Tim Howe is the owner of Yellowhammer Multimedia

Planning an election campaign, why it matters where leaders spend their time