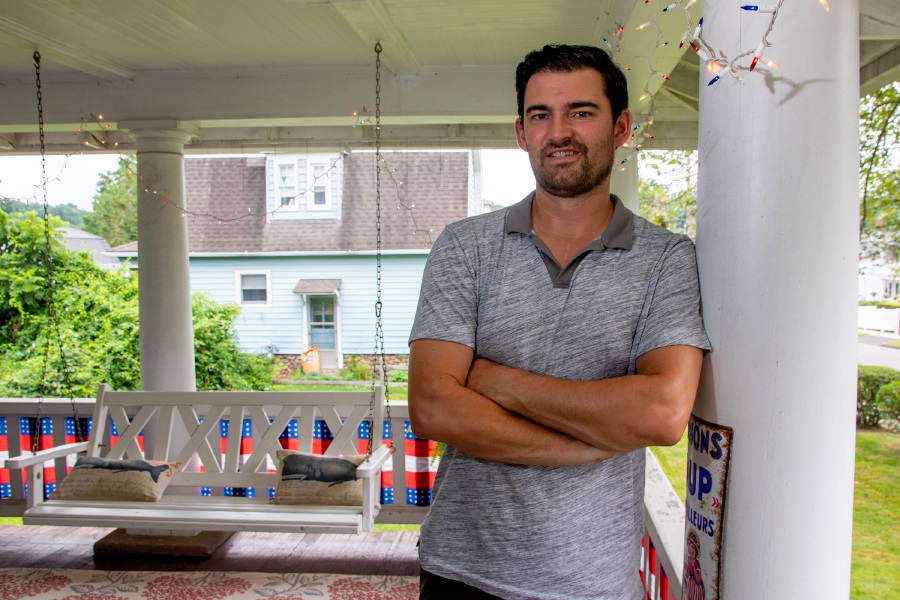 BASKETBALL: Mike Papale, from Wallingford, tells his story in his next book

WALLINGFORD – Many in our area of ​​the state know the remarkable story of Mike Papale.

He was a 17-year-old basketball star on August 24, 2006, when he suffered cardiac arrest at the YMCA in Wallingford.

Papale, now 32, is disclosing details of that heartbreaking day he was brought back to life, his long journey home with family and friends by his side, and the past 15 years of living with heart disease. Since that day, he has dedicated much of his life to saving more lives with his non-profit foundation In A Heartbeat. He raised money to purchase automated external defibrillators to be installed in many schools and public places across the state. This is the same device that saved his life after EMT volunteer Bob Huebner administered CPR until other paramedics arrived with the AED.

All of this and more can be found in Papal’s upcoming 190-page book titled “A Big Heart,” which will officially be released on September 1st.

“I have been working on the book for a few years and there are several reasons for this,” Papale said. “I went into cardiac arrest and found out I had heart disease when I was 17. Doctors keep you safe, but it’s important that heart disease patients hear and learn from other patients. It would have helped if I had had a mentor who had been through the same things as me with heart disease and had learned their life and I think this book may be useful for other people with heart disease.

“I also believe that as a patient with heart disease, you can live a normal, long life with certain limitations,” Papale added. “I hope to live with it for 80 years. I want to help other heart patients. I wanted to do this for inspiration and for someone to turn a traumatic situation into a triumph. ”

Mike Papale, from Wallingford, was a McDonald’s All-American nominee, an All-SCC and All-State basketball player at Sheehan High School and was close to fulfilling his dream of playing college basketball . He was starting to garner interest from college coaches as he approached his final year at Sheehan before his health emergency.

His diagnosis of hypertrophic cardiomyopathy ended his playing days in the field. The book opens with cardiac arrest.

“I didn’t remember it at all so I spent the whole day with my parents and my brother John and my friend Conor Meehan and made them relive one of the worst days of their lives,” Papal said. “I’m sure there are things they want to forget but can’t. I asked them to put it in the foreground for their remembrance. I wanted to know everything they remembered and saw. I appreciate that they do that. I think it put them in a dark place with a dark memory, but I was pretty sure they could relive it quite vividly. ”

Papale puts the reader on his mind when he comes out of a coma in the hospital.

“I recovered from the first day I was in the hospital where I am now,” Papale said. “It’s a good thing to do. It’s therapeutic to go through all the ups and downs and the good and the bad. It is important to be frank and honest. Hope this will be of use to those who might be going through the same thing as me.

“It was really something he really wanted to do,” John Papale said. “He wants to serve as an inspiration to others. I am super happy and proud of him. He wants others to connect with him and I think they will when they read his story.

The young Papal said he was most impressed with his older brother’s attitude.

“I would consider myself closer to him than almost anyone else and he never had this ‘poor me’ attitude,” said John Papale. “He never had that prospect. He was always super positive. This is remarkable. I don’t know if I would be capable of the same mindset and now he’s committed to helping save lives. His dedication to his cause is incredible.

John Papale went on to play Division I basketball at Boston University. Now 28, Papale works in advertising in Boston.

“I remember he was a great player and the player I admired and idolized the most,” John Papale said of his brother. “I’m his brother, but I thought he was as good as any player I’ve seen him play against. Intelligent player and excellent shooter. But he had more of an idea of ​​the game than just being a shooter. I remember he was pretty awesome. Now when we play golf or tennis it is always very competitive. If anything, it just got more intense.

Basketball remains an important part of Mike Papale’s life. After stints as an assistant coach at Quinnipiac, UMass-Lowell and Southern Connecticut State University, he is entering his fourth year as head coach of the Fairfield Prep varsity basketball team.

Papale said his players know his history and the work he does with the AEDs.

“The message I want people to take away from the book is that when you face obstacles in life, those experiences can make you a better person,” Papale said. “Everything that has happened to me has shaped me to who I am. I wouldn’t be who I am if I hadn’t been through this day. It helped me find purpose in life. For anyone with an illness, be patient to let life return to normal. It takes time. You can live a long, normal life with heart disease.

Papale now lives in Stamford and works as a community relations manager for Guilford-based Defibtech, a company that produces AEDs.

Papal started writing the book in 2016 and finished it last year. It is self-published and the eBook will be sold on Amazon, Barnes & Noble, Apple Books, Google Play, and KOBO. The paperback will be sold on Amazon. All versions of the book are currently available for pre-order. Visit www.michaelpapale.com/book for more information on the book.