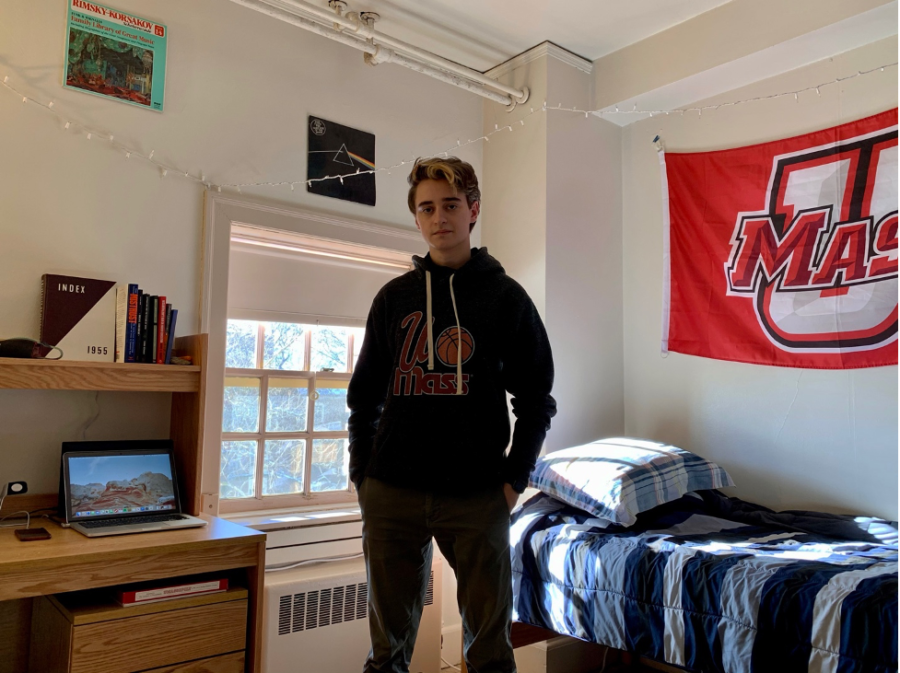 Faced with food insecurity at home, he worked tirelessly to advocate for the interests of others in similar positions – Massachusetts Daily Collegian

â€œThe whole semester was just that kind of prolonged challenge, never having enough time, struggling to have enough food to support myself, and isolated like everyone elseâ€¦ On the other hand, being able to get through the semester after doing the job I did, after crossing over to the other side, was a great triumph â€

When the pandemic began, Chancellor Subbaswammy announced guidelines for which students could return to the University of Massachusetts campus. Some students who could not return found themselves in a difficult position. For one student, the public nature of the guidelines meant he was staying in an environment that was difficult for his mental health and where he faced food insecurity. Adam Lechowicz, a young computer and political science student, spent the fall semester at home, during which he described in a series of emails the various challenges he faced and his hard work to help d ‘other students in a similar situation.

The decision to stay home was partly made for him and partly calculated by him. Since he did not have classes on campus, he felt he had no “justification” to give his family without causing problems at home. He weighed in on other factors, but when the spring semester rolled around he signed up for classes on campus so he had that clear reason to come back.

â€œThere were also two other factors; at first I negotiated with myself and thought the fall semester could be manageable at home, as the online half of the spring semester hadn’t been too bad in terms of load work and I had time to get out of the house – it didn’t. This is not the case. Of course, the university being as expensive as it is, saving money on room and board was also something I was considering, â€he explained.

In early October, like many of his peers, he found himself buried under assignments that seemed to keep piling up. Although he took the same number of credits the previous semester, he felt his workload increased significantly this semester as faculty added assignments that looked like “heavy work.” In other classes, a â€œflipped classroomâ€ option, where lessons are records assigned as homework, and class time is spent on follow-up activities, â€œdoubled the time commitmentâ€ for him.

â€œIt’s hard, and I think it’s hard for everyone. As for me in particular, this has manifested itself in a unique situation where my to-do list is so overwhelmed that there are rightfully days when I have to dedicate enough time in a day to prepare and eat a meal – I think there are reasonable reviews that I should have dropped a class or two to give myself more time in the average day, but I’m stuck with this dilemma between getting a degree a little on time and taking less time. 20 credits, â€he explained.

“I also tried going out and buying some food from the grocery store which has improved my overall situation but also has the same downside as’ sometimes I just don’t have the time “.”

While juggling schoolwork, Lechowicz also immersed himself in campus advocacy and student government. He worked in one of the fall planning working groups with the UMass administration, where he always prioritized students who shared similar experiences with him. He continued this work in the spring semester, as a student member of the spring planning groups. In this position, he continued to emphasize the importance of bringing back students who rely on the physical campus for stability.

â€œI approached them from the perspective that the changes would help students in general, but especially students who have to deal with situational uncertainty in their day-to-day lives – I hope one of these successful advocacy efforts has been successful. makes a difference for someone, â€he said.

As SGA’s Technology Secretary, he helped orchestrate three â€œemail campaignsâ€ during the year for SGA. In these campaigns, students could send emails to the UMass administrator to support a policy change. The first was in support of a revised pass / fail policy which resulted in the extension of the pass / fail option until the spring semester. The second supported a change in student employment policy that would give compensation to student workers on and off campus during the spring semester lockdown. The latest campaign protested against the proposed tuition and tuition fee increases for room, board and out-of-state tuition fees, which were unsuccessful.

In October, while working on campaigns for other students, he started planning a spring semester that would be better than the fall one. Faced with difficulties accessing food and the social isolation that weighs on his mental health, he wanted the spring semester to be different.

â€œThis week has been particularly difficult in terms of food, to be completely honest with you – I feel it affected my thinking for the coming semester. I tried to look for an internship that would basically allow me to take a sabbatical in the spring and get me out of my house. I have only received one response so far, but I remain optimistic. I’m still signing up for some classes just in case, and I wholeheartedly plan to apply for on-campus accommodation as needed this time around so that I can have a constant source of nourishment in my life, â€he said. he declared. â€œIf my application is successful, I plan to tell my dad that I have a course on campus, or a similar deviation, to avoid scrutiny – it’s a little touchy subject. If my application is not accepted, I want to try to move for the spring. A lot of my friends live off campus in the Amherst area, and I might try to see if I can sublet, make the couch, or get one of my other friends into a joint lease. “

In February, when asked what he thought was most important for people to understand the impact of the pandemic, he pointed out that the effects are often closer than initially thought.

â€œI think the most important thing people need to understand about the pandemic is how the stresses of all of this can have unintended and sometimes surprising side effects on people who are closer than expected,â€ a- he declared. â€œIn this society, where life is a delicate balance that can be upset with the slightest disturbance, something like the pandemic does this to a lot of people. Check your friends and make sure they are okay. “

Reflecting on his semester as a whole, he described it as an â€œextended challenge,â€ but noted that his ability to overcome it and do all the work he was doing was a major triumph.

â€œThe whole semester was just that kind of prolonged challenge, never having enough time, struggling to have enough food to support myself, and isolated like everyone else. There have certainly been a few weeks here and there where the combination of workload / isolation really touched me and made everything really difficult. On the other hand, being able to get through the semester after doing the job that I did, being able to move on to the other side, was a great triumph.

During the spring semester, Lechowicz lived on campus and said his mental health “improved tremendously” almost immediately after arriving on campus.

â€œDespite everything that was going on at the start of the semester with COVID, the shift from campus to high risk and the isolation that brought about just being here and having that stability in terms of food and well- Being material really helped me cope with an otherwise isolated semester with a heavy workload, â€he said. â€œI think for me my experience from this last year at university really shows how material circumstances have a ripple effect on other aspects of well-being. This pandemic has exacerbated structural inequalities in our society. “

â€œI think UMass should take steps to better support those student populations who disproportionately suffer from instability – housing, food or situational insecurity – in their lives, especially BIPOC and LGBTQ + students.

Claire Healy can be reached at [emailÂ protected].