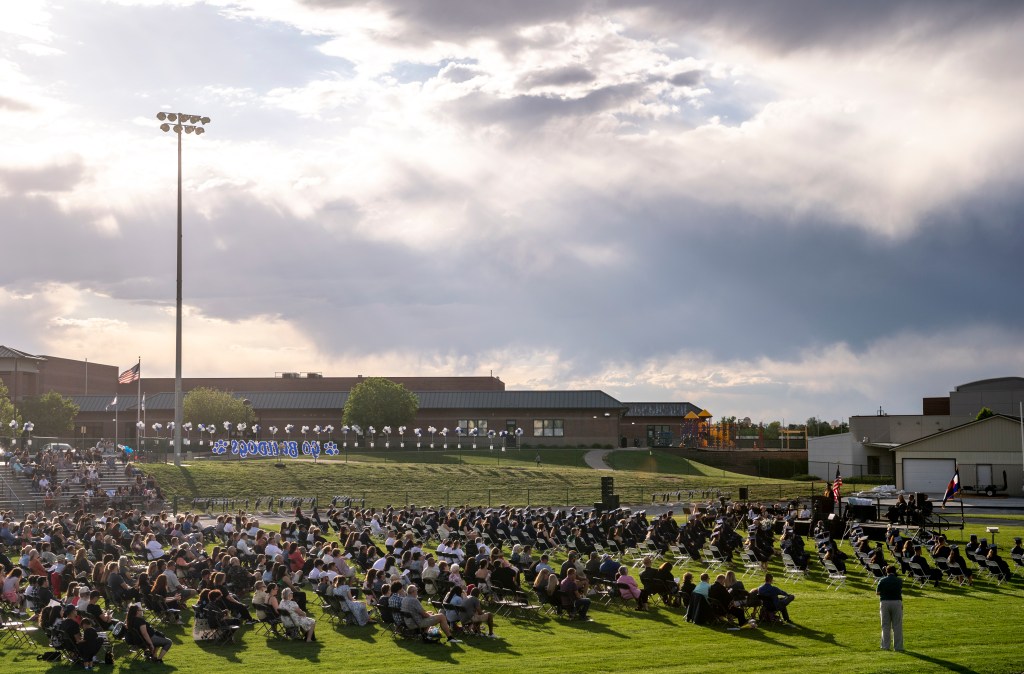 
To celebrate his graduation from college high school, Ryan Beyer did a backflip as he left the stage Friday night at Tom Roche Field.

“We were able to attend classes from the comfort of our beds, which could have contributed to the seniority,” Fosdick Early told the crowd gathered for the 120th start of the school.

And class president Anna Bedell and high school principal Jeff Casey co-hosted a humorous look at the 114 college class members of the 2021 college with a glimpse into their antics and accomplishments.

These included Casey recalling an elderly person who suffered a dislocated knee during the choir, other class members who showed up to school wearing scrubs after attending an EMT class and a review serious skills of collective conduct of classes.

“Some of them are terrible,” Casey said. “Tickets in school zones.”

The nearly 90-minute ceremony ended with a slideshow of the senior class as the new graduates and professors left the stadium field.

Many graduates and their families gathered on a lawn outside the school where photos were taken. Across the parking lot, attached to a fence above the stadium, were bunches of balloons – in school colors blue, gray and white – with each graduate’s name and a quote.

Keegan Kingsley called the evening “perfect” and the ceremony “fun”. Not that long ago, Kingsley, who headed to the U.S. Air Force in late summer, thought an in-person graduation might not happen with COVID-19.

Renee Greenberg was one of the many elderly people at the university to decorate the top of her mortar. Atop Greenberg’s Mortar was an image of a small pop and punk rock band called Waterparks.

Greenberg, 17, has listened to and followed the Houston three-man group since her first year and they have come to mean a lot to her. Around her neck, she wore a Waterparks plectrum on a chain. She picked up the opening pick at a concert in Denver a few years ago.

“They’ve been with me for so long and I hope that as they evolve their music will evolve with me,” said Greenberg. “They grew up growing up.”

Greenberg, a member of the University’s National Honor Society and Music Honor Society, plans to continue his evolution with additional education. She went to Aims Community College, then to the University of Northern Colorado. She said she had an interest in studying psychology or physiotherapy, but entered college with an open mind before committing to a major.

Within an hour of the ceremony, Greenberg was still trying to figure out the end of high school and graduation.

“It’s a bit surreal,” she says. “It hasn’t hit me yet. I didn’t think this would happen.

Mel Trotter launches the public phase of the fundraising campaign